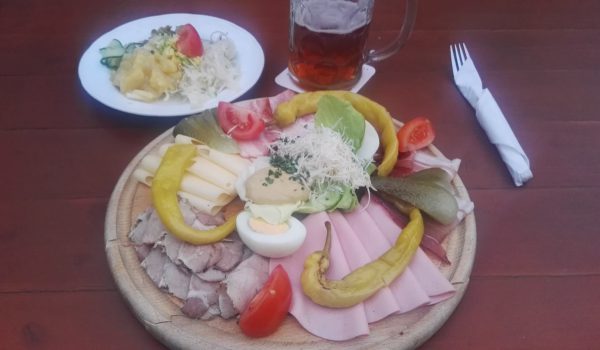 Johann Medl, the owner of Medl Bräu, opened this small brewery after winning big at lottery. Would I open a Brettljause restaurant if one day I become a couple of millions richer through luck? I am not sure, but if I do, my Brettljause would certainly be better than the one of Medl.

Why? Because it would be so easy. I would serve it with bread, to start with, instead of making customers ask for something that everyone expects by default.

To give it credit, Medl’s Brettljause is an example of how to make something almost good out of very mediocre ingredients. Both types of Speck, the tasteless cheese, the Extrawurst and the cold Schweinsbraten tasted exactly as one would expect from a lazy, “let’s take the cheapest stuff” visit to a supermarket (though the Schweinsbraten turned out surprisingly good at the end). However, arranged on a wooden board, with plenty of horseradish, some peppers, pickled cucumbers and a whole egg, the whole somehow became more than the sum of the parts. It was more than edible – it was almost enjoyable, especially with the extra salad and washed down with the homemade beers in the brewery’s small but cozy courtyard.