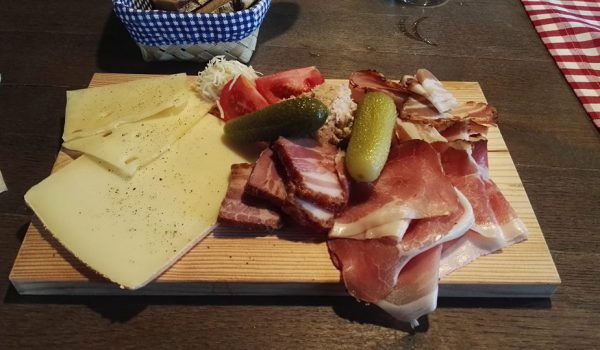 It started in a rather surreal fashion.

“May I have a beer and a Brettljause, please?” I asked the girl behind the counter, having waited for something like ten minutes to place the order.

“A Brettljause. It’s written outside that you have it,” I replied, blaming my horrible accent (and trying to ignore hers).

“Oh, OK,” she said and, passing me a bottle and a glass, retreated to the kitchen.

After a few minutes, she approached my table. “I am sorry, what was it, again?”

“A Brettljause,” I answered slowly, “Like, different sausages and cheeses.” I even wanted to show her a photo on my mobile, but she left already.

In the minutes that followed, a big Austrian, obviously the owner, appeared behind the counter and having shared a few Schnappses with the customers, settled for a bottle of beer.

Finally, I saw the girl leaving the kitchen with a wooden board and starting to walk towards me, but after a moment of hesitation turning back and showing the dish to the Austrian. He just said a couple of words, and the girl hurried back to the kitchen, the board in her hands.

When she eventually brought me the Brettljause with an apology for the delay, I was, understandably, highly curious (and slightly worried) about what I was going to see and eat. Most surprisingly, however, it looked absolutely normal, even good. There were three types of Speck, including a thickly cut Bratenspeck, a ball of Verhackertes and two cheeses, for some reason with black pepper on top. The pepper was, frankly, unnecessary, since at least one of the cheeses had a strong taste on its own, resembling a Dachsteiner. Two of the Speck types were perfectly tasty, but the Bratenspeck might have stayed unpacked for a bit too long and had lost some of the taste. The same could be said about the Verhackertes, which I initially almost confused with the powdery Styrian cheese, as it was falling apart into crumbs and refusing to be spread over the (reassuringly fresh) bread.

The only explanation I can have for this strange experience is that the Stoa Alm must have opened recently. I certainly don’t remember seeing it when I was in the same area last time (which was, admittedly, years ago), and the first floor of the Stoa’s impressive wooden hut is still undergoing some work, most likely to open as a small hotel in winter. The good news is, after my visit, they definitely know what a Brettljause is.