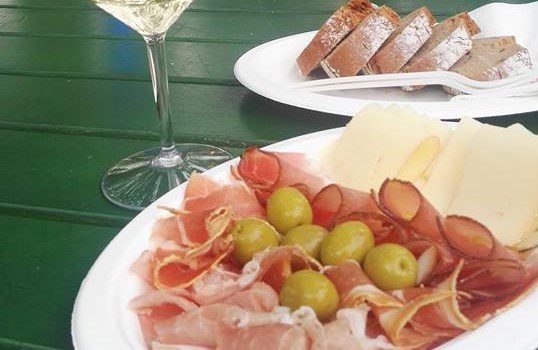 This must be the first Brettljause that I am eating at a place that is officially closed. I didn’t know Weinfach when it was still operational, but now the only way to visit it is to go to Vienna’s Rathhausplatz during the summer, when the annual film festival takes place there. Actually, I had the pleasure of drinking at the very first festival back in 1991, then called Karajan’s Film Festival, and I have to report that its atmosphere is getting worse and worse every year, while the food selection is getting more and more international and the crowds are growing increasingly larger. Still, time permitting, I try to get at least one glass of wine out of each festival, and if there is anything Brettljause-like coming with it, then even better.

Brettljause-like it was, but nevertheless more of a “Weinbegleiter” than the real thing. Three meat types – Serrano, Prosciutto and Speck were combined with two types of refreshingly tasty cheese and some poor-tasting olives. Sitting next to a fountain, sipping overpriced wine, it’s a fine distraction, especially since the cloudy weather appeared to scare off the tourists. Or perhaps it was not the weather but the Streetparade, which boomed from the Ringstrassen with unbearably bad club music.

I have no idea if Weinfach will still be at the Rathhausplatz next year. If yes (and there is no Streetparade nearby), I might very well visit it again. If not, I am not going to cry.