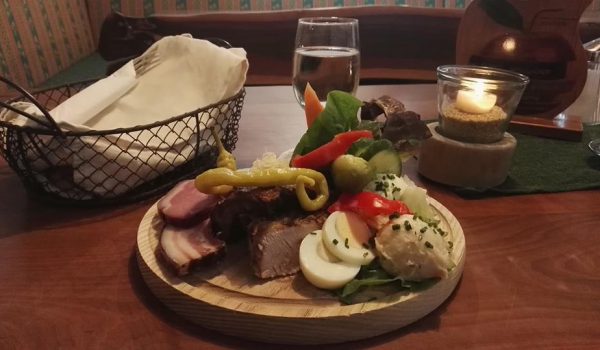 Katsdorf is, all in all, not a nice place. Well, it is probably nice enough in spring or summer, judging by the information boards telling you everything about the surrounding hills and mountains. On a foggy winter day, however, all you are interested to see is where you are going to put your foot in order not to slip and break your leg. Katsdorf also takes more than two hours to reach by train from Vienna, even with the fast Railjet trains we’ve got now. Four hours of travel combined with two hours of trying not to fall is not the best way to prepare for a Brettljause.

On the other hand, Deisinger Hof is a nice place. Occupying the larger part of a typical Mostviertel’s Vierkanter (though Katsdorf is in the Upper Austria already), it is quite certainly the best restaurant in at least a 20 kilometer radius, evidenced by the huge number of people occupying most of the tables far before the official opening hour. It is pleasant to sit in, the service is great, and the Most starts to taste quite OK after the third glass. As for the Brettljause… it’s good but strange. The strangeness comes mostly from the huge amount of potatoes in all forms, including a “potato cheese,” a potato dumpling and something that looks like (and possibly is) a cold mashed potato. Incidentally, all of the above taste the same – namely, of nothing much, just like the also included farmer’s cheese.

On the other hand, the meat part of the Brettljause is better than average. One of the Specks has a bit of a “stored-for-too-long” texture and taste, but the other Speck is fine, resembling the Speck from a south Tyrolean Marende. Then there are cold spare ribs, which I was really looking forward to and was slightly disappointed with having realized they were not smoked or marinated enough. The thickly cut – and huge – piece of Schweinsbraten was something I left for the very end, and would have been very happy with, had it not mixed itself with some potato spread, creating an impression of excessive fat. Well, maybe excessive fat was involved, but well hidden under the spread.

I doubt I am going to visit Deisinger Hof any time soon, but if I do, next time I will probably go for a thinly cut Brettljause or even the Schweinsbraten alone rather than this “flagship Jause.” Or secretly bring some spices with me to give the dish a bit of taste.