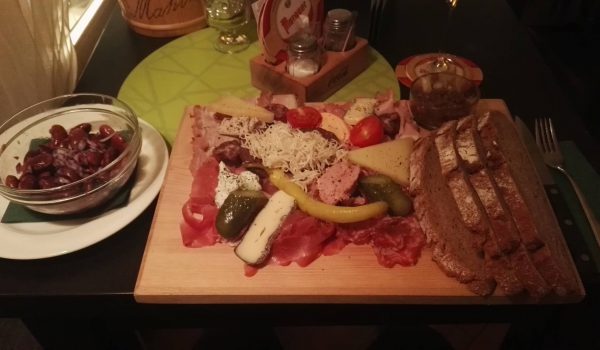 Regular readers know that I have a soft spot for Styrian Brettljausen.

(stop, rewind, start again.) If this site had regular readers – or, let’s face it, any readers at all – some of them would have certainly noticed that I quite like Styrian Brettljausen. You can have a restaurant located just some 100 meters from the Lower Austria’s border, but the fact that it is standing on Styrian soil seems to improve the quality of its Brettljause by something like 100% straight away. Forget Tyrol (the east one, at least), forget Salzburg, forget Vienna (big time) – if cold cuts are your thing, head to Styria now.

Or, as I’ve just learned, head to Rudolfsplatz, a few minutes away from the Schottenring underground station. The Brettljause of Steierplatzl, a tiny place in the center of Vienna is not only good, it’s world-class.

Having consumed over 300 Brettljausen and alike in total (if I have the rule of not reviewing the same location twice, it does not mean that I don’t visit it twice), I believe I have a pretty good idea of how a perfect cold cuts plate should look like. Well, I tell you, based on my experience, the Steirische Brettljause of Steierplatzl is pretty damn perfect. To start with, it’s big: sufficient for two not-too-hungry people and quite filling for a single moderately hungry one. It’s fantastically varied: the six types of meat, two types of cheese and four spreads are extremely rare to come across, and having the ingredients taste so distinctly different is almost a miracle. The Brettljause is cheap for what it is, but most importantly, it’s one of the best balanced Jausen I have ever seen. The ingredients are not only good by themselves, they work perfectly together. In a different Brettljause, I would have normally started by clearing all the stuff I don’t like, beginning with the liver spread and the blood sausage. In the case of Steierplatzl’s dish, I felt like taking a small bite of every ingredient and repeating the process in a circle. The liver was not too livery; the Schweinsbraten were fresh, tasty and had no cartilage whatsoever. The Speck was the real Speck of the southern Styria: tender and perfectly salted. The Liptauer-like spread tasted home-made; the blueish pumpkin spread was a genuine tribute to the Styrian pumpkin obsession. The horseradish was fiery and tear-inducing, exactly how the real horseradish of Styria should be, the cheeses tasty without being over-the-top stinky, the strange home-made chutney refreshingly bitter.

It’s as if someone had spent ages perfectly balancing this Brettljause, making sure that all the important tastes were present, but that none of them were overwhelming. The more tedious stuff, like the blood sausage and the hard sausage were present but reduced to the minimum. The tasty things, like the soft cheese and the Speck were plentiful enough to make one happy but not too plentiful to bore one to death. It’s a cold cut masterpiece.

Had such a Brettljause been served in a hut with the snowy mountain peaks around it, I would have given it the top score and abandoned my site, since any further search for a perfect Brettljause would have become pointless. Of course, having it served in a slightly stressful atmosphere of the city center and following six hours of non-stop meetings at work did affect my perception slightly. Besides, I can’t help feeling a bit worried because the location at which Steierplatzl is housed seems to have changed its owners at least three times over the past six years.

I sincerely hope that Steierplatzl survives for a long time. It’s a true embassy of Styrian Brettljausen in Vienna. If I had to design a Brettljause myself, I would not be able to do better. Well, well… I would probably add a hard-boiled egg to cement the Jause’s placement at the pinnacle of perfection… Oh yes, I definitely would.