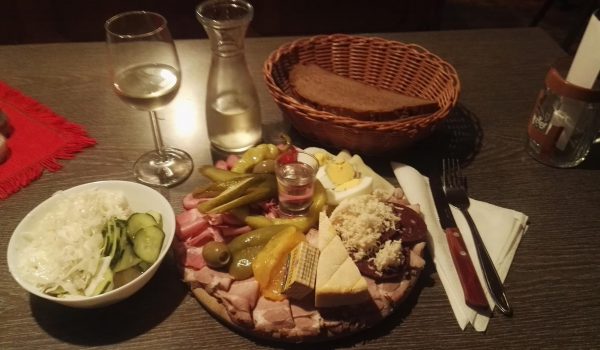 Vienna is a city of many Heurigers. Different Heurigers. There are the Heurigers of the 19th district: mostly beautiful and pleasant at off-peak times, but very loud and touristic in the evenings. There are the “city” Heurigers on the 1st district, existing solely for the tourists too busy or stupid to travel to the 19th. Then there are the 21st district’s taverns, frequented by the locals and the “advanced tourists.” The Heurigers of the 23rd, despite including a couple of the city’s very best, are all but unknown to non-Austrians. Finally, there are the strange Heurigers of the outer Ottakring (the 16th district), located between the S45 train line and the edge of the Vienna Woods: touristless, simple and (with rare exceptions) not especially good.

I’ve just discovered that there are also Heurigers in what I call the “inner” 16th district, that gloomy and not-very-safe area between the Gürtel and the S45 line, which working class Austrians share with immigrants from Turkey and ex-Yugoslavia. It’s a place of contrasts: at a crossroad near my destination Heuriger, some “Turkish culture society’s” office faces a small dark Viennese Beisl with the “HC Strache was here” poster hanging over the bar. The entry to the Herrgott aus Sta (literally the “God out of Stone,” a tribute to an old Wienerlied) itself is uninviting, and the first impression once one is inside is not very positive either, especially when the courtyard is closed. It looks like a place that drunks visit in order to get more drunk, or where the locals who went on early retirement thirty years ago go to celebrate their 80th anniversaries.

Considering its location, it is weird that the Herrgott has a Brettljause on its menu. It’s actually surprising that it has a menu at all. It’s nothing short of a miracle that the Brettljause is in fact rather good.

First, they certainly know how to make a Brettl worth its price: it’s so covered with stuff that the stingiest of customers would have no reason to complain. True, it’s mostly covered with Schweinsbraten and Geselchtes, with the Blunzen and cheese playing secondary roles, but the result is impressive. It also impressed me to find a huge slice of soft cheese in the middle of the board. It would have fascinated me more had it had any strong taste, but I guess one can’t have everything.

Both the Schweinsbraten and the Geselchtes were great, much fresher than I had expected. Best of all, there were so many slices of them that I could pile them on the bread freely, combining with the equally abundant horseradish, hard-boiled eggs, cucumbers and fantastically sweet pickled peppers, thus creating rather impressive and tasty sandwiches.

My main criticism is that the Brettljause could have been more varied. When ordering – which can only be done at the counter – I noticed quite a few interesting and authentic-looking meats including Speck, and was a bit disappointed not to find them on the Brettljause. Apart from that, Herrgott aus Sta is a nice discovery.