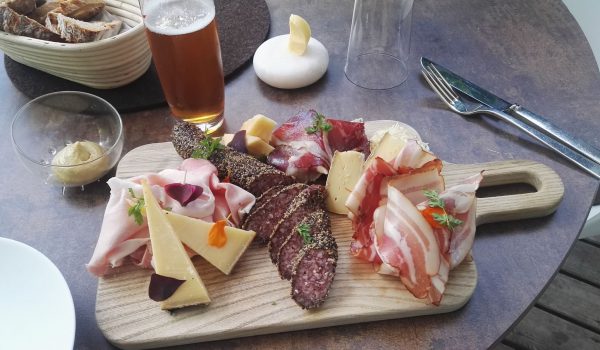 What a miscalculation. Having looked at the super-expensive fixed dinner menu of this Juan de la Cruz Amador Perez’s restaurant (replacing the good old Hajszan), I had no doubts that their “big Brettljause” would be somehow out-of-ordinary but quite small and ultimately disappointing. The idea of taking the 30% cheaper small version could not even cross my mind.

It was a mistake. Paying 18 Euro for a Brettljause already makes you feel uneasy, but having to return half of it is doubly annoying. The main problem was not that it was too big for me (though it actually was), but that the “cover” starters – the home-made bread with salty butter, Grammelschmalz and some brilliant liver thing (it’s so strange to use the words “brilliant” and “liver” next to each other, but it was truly great) managed to fill me up completely.

And then there was a blunder on Amador’s side: to include an almost entire pepper-covered sausage as part of the dish. That sausage is good in extremely small slices, as the pepper makes the taste far too strong. Even two persons would not have finished the entire length of it. I have tried my best, even removing the entire pepper-covered layer with a knife, but failed miserably. In a less sophisticated restaurant, I would have probably asked to take the leftovers with me home, but at Amador’s that would have looked highly inappropriate.

I have also returned quite a lot of Speck: the exquisite Austrian one and the fattier, but still very good Spanish Jamón, and I still regret that as I am writing these words. I am happy that I could finish all of the super-ham that dissolved by itself in my mouth, and all the four types of Spanish cheeses. Damn, why wasn’t I hungrier?

The strange thing, the final bill wasn’t exorbitant at all. A part of the reason was that I stuck to the rather disgusting Viennese beer rather than that trying the fancy wines, but the fact that the restaurant did not charge me a fortune for the beer has raised my respect for it greatly. Actually I see myself coming back to try some of their other à la carte dishes. And perhaps another Brettljause one day, albeit a small one.