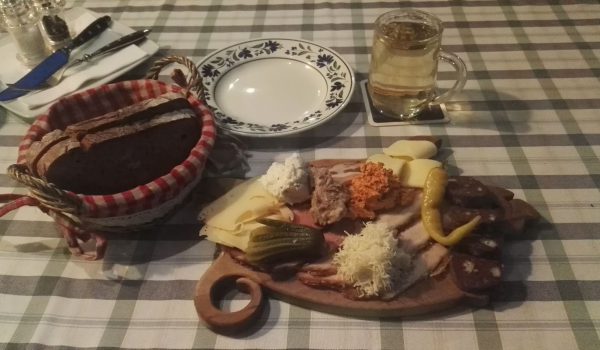 Last time I went to Vogelbauer, which must have been about a year ago, I ended up so drunk, I could not remember what I ate, despite having a blurred picture of the Brettljause on my phone. The only thing that I could recall was that I had left feeling quite satisfied.

I must have improved since then, for now, more than two hours after having visited Vogelbauer, I still have a pretty good recollection of everything that happened there, despite having consumed an equivalent of a bottle of white wine.

I remember seeing a cat, for one thing. There was also a wild garden of sorts, looking quite out of place just a few meters away from a busy street. There were customers, too, most of the them sitting inside this “locals only” establishment, with only two guys sharing a table outside next to mine. There were only two tables outside anyway, with the moody Viennese April having smoothly turned into a far-too-cold Viennese May.

Best of all, I still recall having a surprisingly fine Brettljause. When it arrived at my table, I was immediately hit by the strong smell of horseradish, which was just as fiery as it looked. It took me the first five minutes to get rid of the annoying Blutwurst, mixing it with the above-mentioned horseradish, slightly old (and thus tastier) Liptauer, a rather wonderful garlic spread and bits of flavorless – and thus expendable – cheese.

Once that less-than-pleasant activity was over, however, I was left with juicy Schweinsbraten (tasting a lot like a cold Stelze), perfectly salted thin slices of Speck, rather thick slices of fresh Geselchtes and a ball of beautifully hardcore Schmalz. How Vogelbauer has managed to maintain this level of authenticity with dozens of supermarkets surrounding it is beyond me.

In our globalized and over-commercialized world, places like Vogelbauer should not exist, and I am afraid it’s just a matter of time till they close their doors forever. While they are still around, one would be highly stupid not to cherish every day of their existence.