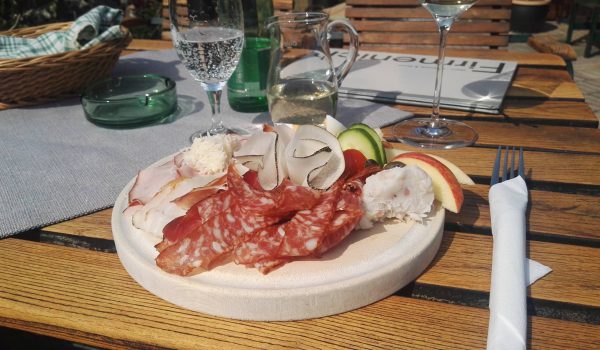 Having finished two quarters of Steinberghof’s seriously good wine and waiting for the third, I saw the former president of Austria’s health insurances union passing by with his wife. He was not pink and did not have a trunk, so I assume he has not a hallucination, especially since the only other customer immediately jumped on him to introduce Herr Präsident to his family and the dog.

One must trust presidents when it comes to Brettljause places, and Steinberghof’s location is quite fantastic, with the terrace providing a beautiful view over the surrounding hills. The Brettljause was up to the expectations without exceeding them. It was fresh, varied, competently built and nicely presented, but lacked any kind of a “wow” factor.

The ingredients, listed in the order of decreasing interest, were: ham (really good, but not something one cannot find in a supermarket), Speck from a hairy Mangaliza pig, Schmalz (salty and good), cold Schweinsbraten (with annoying bits of cartilage), a salami-like sausage cut in thin long slices, cheese (with a slight taste, but overall quite generic), and a Liptauer spread. There was supposed to be some liver, too, but I asked to replace it with a bit more Speck.

I cannot say I did not enjoy it – and would have enjoyed it much more had the bread been fresher – but in this case, the expectations were much higher. At one point I found a thick Schweinsbraten slice – the cook’s mistake, obviously – and it tasted so much better that I wonder why the entire Brettljause could not have been served in thick slices. For South Styria, the food was average. But Styrian average is by definition better than any other.