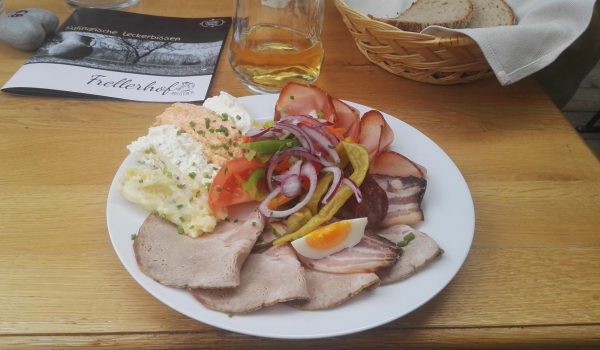 There are Speck-heavy Brettljausen out there, and some Schweinsbraten-heavy Brettljausen. There are even some excessively cheesy ones, diluting the boundary between a Brettljause and a cheese platter. The Mostbauernjause of Frellerhof is almost unique by being heavy on spreads. It does not matter that the menu puts all of them under the “Cheese” heading. Everybody knows that Liptauer is not really a cheese. And what they call “Erdäpfelkäse” in some regions of Austria is not really “Käse,” but a mashed potato with sour cream.

Neither Topfen has ever counted as cheese, despite being translated as “cottage cheese” by the mighty Google. No matter if it has garlic in it or not (the Brettljause of Frellerhof features both varieties). Not that any of this matters, of course, because all the four spreads were excellent – refreshing and tasty – and served in such ample quantities that the two big slices of fresh bread were barely enough to spread them onto, forcing me to eat the meat half of the dish without bread.

The meats were brilliant without the bread, too. The Braten were probably the most boring part: good quality but not special. The two types of Speck, on the other hand, left nothing to be desired, tasting anything but industrial. The dark heavily smoked Speck was especially good, melting in my mouth like no Speck should logically do. Finally, the small cut of a salty “Hauswurst” sausage left me craving for more, as like Speck, it had a very pleasant consistency: not tough at all and satisfyingly fat and crunchy.

Just to make the visit sound even more attractive, the Most of Frellerhof is great (especially the more expensive “pure” sorts), and the Heuriger itself is beautifully built. It perfectly combines “urig” with modern, and sitting in the spacious garden one can enjoy a rather nice view over Mauthausen and the Danube below. And, mercifully, not see at all the former Nazi concentration camp on the hill just above.