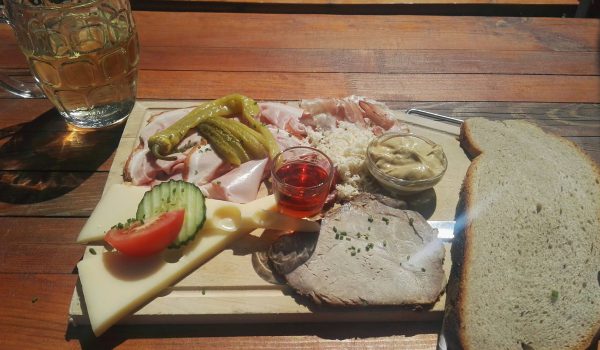 I must have visited Waxriegelhaus at least three or four times in the past, with the path that starts just behind this hut being one of the easier way to get up the Rax mountain. (Note that I am using the word “easier” rather than “easy.”) I don’t remember it serving a Brettljause, however. Maybe I was not paying attention, or maybe it was simply not on the menu.

In any case, now that it is certainly there, I can only recommend you take a bus to Preiner Gscheid and walk the steep path for 40 minutes to reach Waxriegelhaus. Despite all its simplicity, the Jausenplatte is worth it. It only has five ingredients: Speck, ham, Schweinsbraten, salty sausage (served in such small quantities that I wonder if I should count it) and cheese, but all of them are good. The Speck, according to the menu, is homemade and is brilliantly tender, melting in the mouth similarly only to the Speck of Amador. The thickly-cut cheese and the Schweinsbraten have taste, for a change, and the ham is good quality. Even the mustard tastes slightly different, and the bread is incredibly fresh, considering that today is a Sunday.

OK, they screwed up the horseradish, cutting it so finely that it had lost all its taste. But they more than compensated that deficiency by including a shot of really good Zirbenschnapps.

If you can, try to get to Waxriegelhaus at the end of your hike, that is, take the cable car and then walk half way across the plateau before taking the path down. Like that, you will approach the Brettljause with a greater hunger than me and will spare yourself the suffering of climbing a few hundred meters after a liter of Most and a Schnapps.