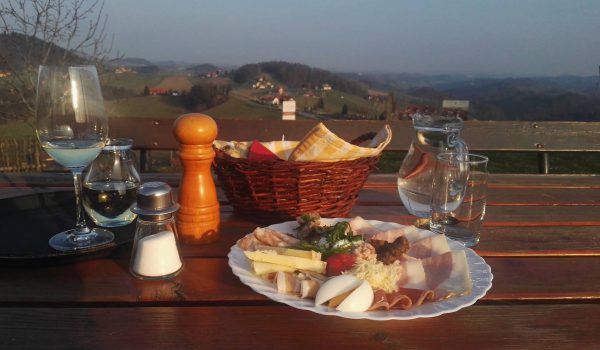 The Kästenburg is perfectly located, offering one of the most beautiful views in the whole South Styria, even if what you see is mostly Slovenia. With a view like that, its garden should have been full with people on the warm spring day like today, and the waitresses should have been running around delivering one Brettljause after another.

As it turned out, I was the only customer, and had to order and pick up my Brettljause myself. That did not make it any less enjoyable. What did make it less enjoyable was the fact that I had finished another Brettljause less than four hours earlier. Which is a pity, because all in all, the Jause was good. At least half of it was good ham, though with a bit too much fat for my liking. On the other hand, the Speck came in much smaller quantities and was not fat enough. The plate also contained three slices of pork jelly, looking unappetizing and tasting accordingly. On a more positive note, the liver spread was quite OK (for a liver), the half of a salty sausage was good, and the Schmaltz was more than fine. The white cheese spread did not taste of much, but served as an adequate replacement for butter. The “real” cheese, however, surprised by having quite a lot of taste and smell and is the main reason this Brettljause has scored so highly.

The South Styrian wine street provides so many opportunities for drinking and eating that it’s hard to single out any particular Heuriger. The Kästenburg may not be the best of the bunch, but it’s certainly not much worse than the best ones. Whether you want to eat a Brettljause there depends on your hunger, but be sure to stop for a glass of wine just to appreciate the view.