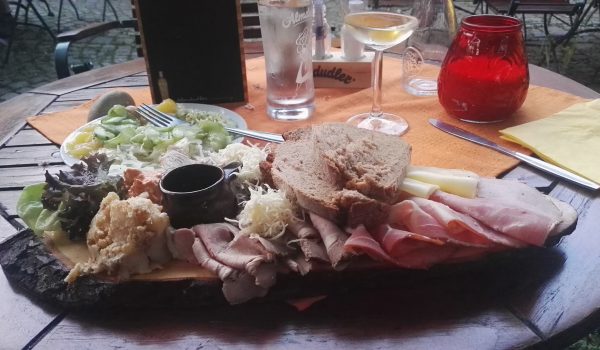 Simmering, Vienna’s 11th district has always been the one I was least familiar with. Considered the “workers’ district,” its main attraction is the city’s cemetery. Otherwise, it’s just a combination of warehouses, factories, ugly apartment blocks and – if one moves closer to the city’s border in the direction of the airport – dull single-family houses. If it had any restaurants, I always imagined them to be disgusting Beisls full of uneducated drunks. When I googled for the places to eat, I found, somewhat unsurprisingly, a large number of them offering to host special after-funeral parties. And then, by chance, I found a Brettjause in the Harrys Augustin and decided to give it a try.

I cannot say that the visit completely turned around my perception of Simmering, but it did improve it a bit. On my way I saw a couple of cafes that looked almost cozy, an occasional old street, a simple Heuriger and even a small park with no graves in it. And then there was Augustin’s inner courtyard, which was quiet, clean and generally very pleasant to sit and drink in.

Sadly, their Brettljause was crap. The best part of it was the complimentary Marillenschnapps, which was quite a difference from the cheap Obstlers most Brettljausen typically come with. The bread was fine, too: fresh and with a satisfyingly crunchy crust. Finally, the horseradish was quite strong; a few bits of it at any rate.

Things went steeply downhill from there. The Geselchtes was edible but too boring and supermarket-y. The cheese looked simply sad: slightly melted and starting to be transparent. The Schweinsbraten would have been plain boring if not for an unpleasant piggy aftertaste. The Liptauer tasted too crude and contained rather big pieces of something unidentifiable (hopefully, onions). The Grammelschmalz lacked any Grammel and therefore was nothing but warm fat. And that was it, not counting a lonely salad leaf.

If graveyards are not your thing, Augustin’s garden is probably one of the most relaxing places in Simmering. One can do much worse than to spend a couple of hours reading a book and sipping wine from their rather impressive collection. A mixed salad from the salad bar is highly recommended, too. As for the Brettljause, do yourself a favor and avoid it.