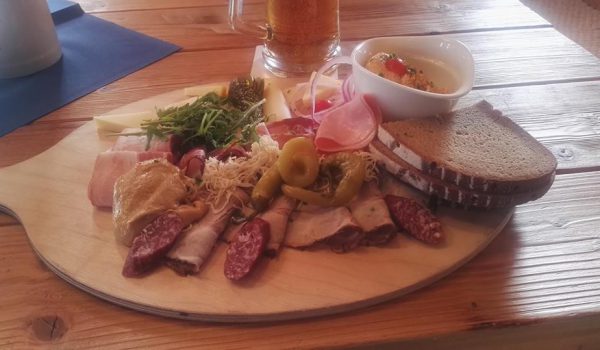 Tomorrow is the last day of the “Wiesn-Fest,” Vienna’s poor-man version of Oktoberfest, and the entrance to the Prater amusement park is full of people in Dirndl and Lederhosen going to the “Zelte” (tents) to drink and listen to bad music or to the “Almen” (fake mountain farms) to drink, listen to bad music and eat. The three “farms” appear surprisingly solidly built for something that exists for three weeks a year only, and serve the same choice of dishes, albeit under confusingly different menu covers. One of the dishes is a Brettljause, looking quite impressive and probably too big for one person. It also costs whooping 42 Euro, making it too expensive even for three persons. If I win the lottery or convince the organizers to give me a free sample in exchange for a review (no guarantee it will be positive though), you may read something about it here next year. This year, however, it’s beyond my finances (and anyone’s common sense, actually).

Fortunately, a couple of days ago my regular Google hunt for Brettljausen pointed me towards the Prater Alm, another “fake mountain farm-like” restaurant and event location at the other end of the theme park. Somehow I remember it opening, closing and reopening again (possibly multiple times), and if its popularity that I observed today is any indication, its days are counted. Upon entering its spacious hall, I was not even sure if the restaurant was open or not, until a friendly waiter reassured me that it was.

To tell the truth straight away, Prater Alm’s Jause is not as good as it looks. On the other hand, it looks good enough that the “not so” does not make it bad. The main problem is that all the main ingredients except one are nicely presented and plentiful, but taste very industrial. The notable exception is the Liptauer spread, served in an oversized bowl and tasting fresh and enjoyable. On the other hand, the two types of Speck, two very similar types of cheese, a few slices of a long Hauswurst and many slices of Schweinsbraten taste exactly as you would expect from cheap generic brands at a supermarket.

On a positive side, the horseradish was strong, the mustard was quite tasty, and the onions and rucola were altogether welcome. The trouble was, after a few minutes of eating a piece of this and that, I started to get seriously bored. It’s a huge Brettljause, better suited as a starter to share among three or four persons, and – unlike the Wiesn-Fest’s one – absolutely affordable. If you are planning to eat it alone, come very hungry and have no great expectations.