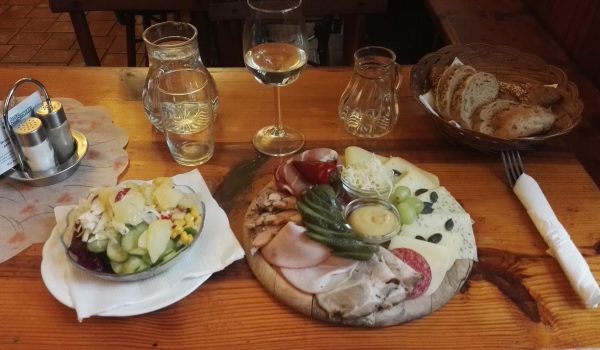 If, despite my catastrophic lack of experience, anyone asked me to choose the culinary capital of the world, Baden bei Wien would not make my top 100 list. It would rather make my top 10 list of places to avoid. I would sooner send my friends to the Heurigers of the nearby villages of Sooß and Pfaffstätten than make them suffer the mega-touristic and/or deadly boring retiree-oriented establishments of Baden.

Kernbichler has made me change my mind. Perhaps its closeness to Pfaffstätten has played a role, but despite offering its services in Russian and English in an apparent nod to the tourists, it’s still a very authentic Austrian wine tavern that even the locals under the age of ninety would visit on a regular basis. Quite Spartan inside, it serves a selection of cheapish but very drinkable wines, and its basic buffet is compensated by a short but comprehensive menu, which includes, as you should have guessed by now, a Brettljause.

The Brettljause was strongly better than average. Kernbichler obviously put the emphasis on the variety aspect and nearly succeeded. Out of the ten different meats and cheeses on my plate I had to discount two cheese types for being too similar, but the remainder was still sufficient to keep me interested. True, many ingredients could have come from a supermarket, but even the effort required to pick and cut so many of them and arrange them on a Brettl was worth some commendation. Especially since Kernbichler thought of adding not only the customary horseradish, picked cucumber and mustard but also the much less common ingredients like grapes, pumpkin seeds and hot red pepper.

Of all the meats, the most enjoyable one – and that surprised me a lot – was the pork jelly. Fresh, tasty and, unusually, containing more pork than jelly, it went extremely well with the strong horseradish, mustard and fresh bread. The only ingredient noticeably missing was a hard-boiled egg, but in any case, this Brettljause did not only put Kernbichler on the list of Heurigers I would happily visit again, but it also improved my personal opinion of Baden as a town to have a snack in.