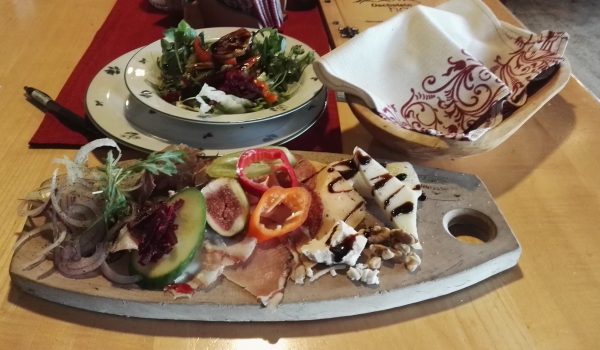 I have seen many things in a Brettljause, but this is the first time I see a slice of fig in one. There is another fig slice in the mixed salad, with Styrian pumpkinseed oil over it. It tastes great.

The strange thing is, I am not eating at a hipster place like Zum Gschupftn Ferdl or a bohemian one like the Weinhandwerk; I am enjoying the panorama of the Schladminger Tauern from the very traditional Dachsteinhaus hut above the Styrian ski village of Ramsau. As I cannot stop repeating, Styria is the Brettljause capital of the world, but finding such a creative Brettljause here is still quite surprising.

The creativity does not stop with the fig, of course. The cheese is covered with some sweet stuff usually found as a plate decoration at sophisticated restaurants so that the plates do not look too empty. There are two types of nuts, and paprika slices of three different colors, and rocket salad, and some very dark and salty Speck, which I also meet for the first time.

Everything tastes great by itself and fantastic as a combination, especially when supported by the salad. The three or four types of cheese provided (including goat cheese) could have had more distinct and stronger tastes, but there is a separate cheese plate on the menu that may correct that deficiency. All the Specks and salamis are of very good quality, and it is easy to believe they come not only from the local but from very carefully chosen producers.

It is by no means a cheap Brettljause, but it is worth the price, and the two unusual types of Schnapps that I have tried could easily justify the visit by themselves. The Dachsteinhaus has somehow escaped my attention during my previous holidays to Ramsau, but having visited it today, I wish I could come back very soon.

In the meantime, we have a reason to celebrate: this is the 300th Brettljause on this website. The thought that I ate and reviewed so many makes me slightly proud and seriously scared. Had the human body been unable to efficiently dispose of the processed food, by now I would have been some 150 kilograms heavier and half pig.