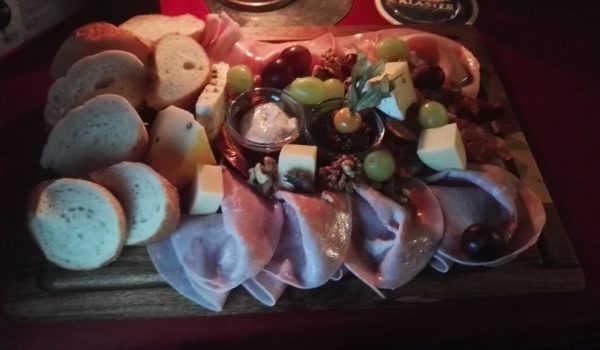 Prague can be called many things, but the culinary capital of the world it is not. Unless you are crazy about smoked pig knuckles, badly roasted duck and goulash, the tourist areas of the city are going to drive you into a depression. For fairness sake, there must be places in Prague where one can eat properly – I found an OK one just a few hours ago, having made sure I ordered something outside of the above standard list – but generally as much as I can recommend Prague for its beer, as little positive I can say about its cuisine.

Peklo (literally “hell” in English) is located at the top of the Prague’s Strahov hill, which is still quite infested by tourists but can be considered a heaven of quietness when compared to the Charles Bridge below. The restaurant is located underground in something looking like a wine cellar, and is honestly quite beautiful, though suffering from permanent draught and the slightly stressful atmosphere caused by the clients’ constantly arriving and leaving. But it does have a Brettljause-type dish, which meant I simply had to stop by.

The “cellar board” looked better than it tasted, but it did not taste as bad as I had been expecting. With four types of cheese and three types of meat on it, it actually created a very good first impression.  Unfortunately, the two types of ham were hard even to distinguish in the darkness of the cellar, while their taste was exactly the same. The cheeses, on the other hand, looked very different but the only time I felt any taste from them was when I bit on a black pepper inside one of the cheese sorts. Actually, most of the taste I got from the dish came from the creamy mustard (good with the ham) and the spicy jam that I ate the cheese with. There were a few grapes and chestnuts included, too, which was welcome. The real highpoint of the dish was, however, the smoked sausage cut into oval slices: it was pleasantly crunchy (possibly because of its skin), easy to chew and tasty in a not-too-strong way.

I guess the above does not sound too exciting, but the truth is, were I to recommend anything in Prague based on my very limited two-day experience, Peklo would come at the top of the list. It has a nice atmosphere, enjoyable beers and a park nearby. The Brettljause is nothing special, but then no food in Prague is.