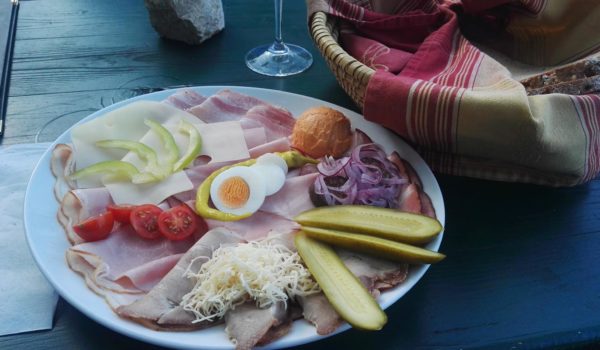 Here is a case study on how a series of small stupid mistakes could trigger a Brettljause disaster.

Mistake #1: be too optimistic about distances. I knew that the way from the nearest railway station to Falkenstein was not a short one, but just-under-10 kilometers shown to me by Google Maps did not look like an impossible undertaking. 10 km at a normal walking speed of 5 km/h should take me two hours, right? Wrong. What Google fails to take into account are the small twists and turns of the road, as well as the elevation and the fact that I walk far slower than normal, constantly playing with or reading something on my phone. Thus, having arrived at 11:00 and planning to go back at 17:00 was far too optimistic. I could not even make it back by 19:00, arriving at 20:00 and then waiting for an hour until the train arrived.

Mistake #2: assume that all great Heurige serve Brettljausen. Falkenstein had two Heurige with the “Top Heuriger” award, but the website of neither of them mentioned a Brettljause explicitly. The reason, as it turned out, was because it was not on their menus.

Mistake #3: forget to look for special events. The “Top Heuriger” that I eventually landed in did not only lack a Brettljause. It did not serve any kind of food because of a “cellar street festival” on the same day. Such festivals, for all the opportunities of getting drunk and spending money on the locally produced crap you will regret having bought the next morning, have a common problem of usually being Brettljause-free. It’s just too complicated and slow-to-make a dish to serve to someone who is walking from one stand to another.

Thus, all things considered, I was quite lucky to come across Gmoakeller, which was suspiciously empty compared to the other wineries present at the festival, but whose menu had the kind of dish that I was looking for.

Seeing the score below you may think I was quite disappointed with what I’d got, but the truth is, the “Platte” of the Gmoakeller was totally adequate. It had all the ingredients one would expect and did not deliver any surprises. Cheese, Liptauer, Speck, Geselchtes, Schweinsbraten and ham – this combination must be what the children of cellar owners memorize before they learn the alphabet. At least in the Heurige of Lower Austria’s Weinviertel, the above ingredients are so commonplace, that often the only difference between Brettljausen comes from these ingredients’ quality. In Gmoakeller’s case, the quality was at a “good supermarket” level, meaning that the slices were most likely cut off larger pieces bought at a local supermarket, selling products from the same region. It may be – but I cannot say for sure – that two types of ham were actually included, but they had such a similar look and taste that they must have come from the same part of the same pig.