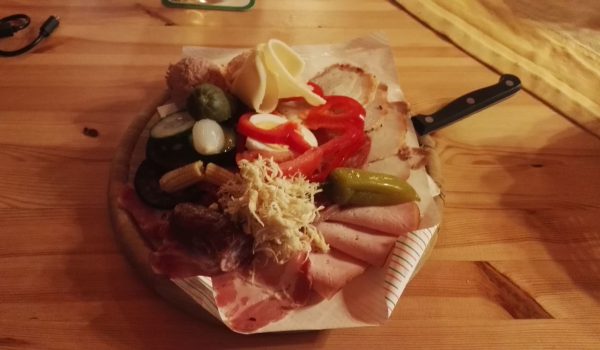 I have always wondered where the inhabitants of small Austrian villages disappear on Sundays. Well, one does not see them much on weekdays either, but one can spot a tractor or two in the field, or assume that people travel to bigger towns for work. On Saturdays, they could be off shopping. But on Sundays, the villages look deserted: there is no one on the streets and hardly any light or noise coming from the houses. What are the villagers doing?

Now I know: they are eating and drinking at very remote and tourist-free Heurigers like Blockhausheuriger Posch. When I arrived, the tavern, though very spacious, was totally packed with people. At least three huge parties were taking place simultaneously, one even involving someone playing a brass instrument loudly and laughingly badly. The owner and his family were doing an incredible job juggling all the Schnitzels, Brettljausen, Most and juice, but catching their attention to place an order or to pay was quite a challenge. Besides, the noise and the people running past my table to and from the toilets every ten seconds created the level of stress that not even my three mugs of Most could quell. I could not help eating my Blockhausplatte faster just to return to the relaxing quietness of the winter day outside.

In addition, the Blockhausplatte did not particularly encourage savoring, as it managed to combine extreme variety (I counted eight types of meat, two spreads and one type of cheese) with surprising blandness. Compared to creative and authentic Brettljausen of Mostviertel, the cold cut plates of the Bucklige Welt area are as plain as its Apfelmost. True, the ingredients must have come from the local producers, but these producers seem to have very simple views on what makes quality food. The slice of a dry Hauswurst was the most enjoyable part of the Jause; the liver spread was the tastiest, but far too liver-y for my liking. The Liptauer was not bad, though I am still unsure whether the pleasant tingling on the tongue came from the Liptauer itself or from the super-garlicky mixed salad that I took in addition. I also quite liked the Blunzen, strangely enough, as the taste was chewy and not at all repulsive. The rest of the meats, apart from the Schweinsbraten, were very dry and not salty enough – and that included not only the two types of ham, salami and Geselchtes, but even the pork jelly. The Schweinsbraten, on the other hand, were extremely fat and full of cartilage; I was quite happy that only a single slice of them was present.

What Posch did super well, on the other hand, was the „decoration” job: the Brettljause had a half of an egg on it, as well as fresh and pickled cucumbers, a really spicy green pepper, some red bell peppers, cocktail onions, baby corn and, of course, horseradish. I did not really understand of purpose of inserting a sheet of paper between the wooden board and the food, however, but I hope it was to save me from some very dangerous bacteria (and not at all to make washing of the plate easier).

On the whole, it was an above-average Brettljause marred by the region-typical lack of memorable taste. If you do not mind a not-very-exciting one and a half hour walk from Neunkirchen or Ternitz to reach this Heuriger, I suggest doing it on a weekday, when it would hopefully be less busy, and in summer, when it’s possible to sit outside.