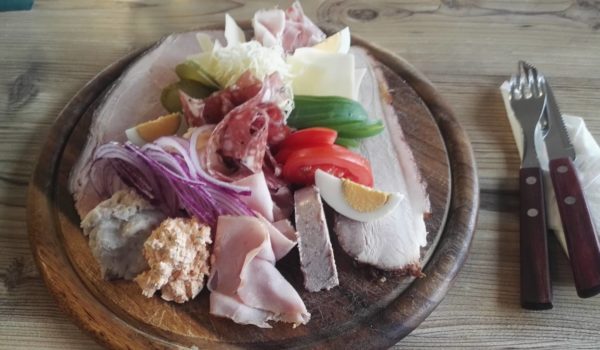 I have never thought it would be so difficult to find an open winery in the Southern Styria. Going from hill to hill on my rented e-bike, I was almost sure to encounter Heurige if not every 200 meters, then at least every kilometer. That I did, actually; the problem was, most of them were closed either because of the off-season (weekends only, guys) or because it was too early.

Not that Schmölzer make any impression of being open either. I spent quite some time checking my phone, and only thanks to the wonders of Google’s opening times information I dared to open the winery’s door to find myself in a totally empty room, apart from a little girl and her mother, who confirmed that the restaurant was indeed open.

Being alone is spooky by itself, and I am always afraid of the staff getting overly social. Fortunately, this was not the case this time, the owner only asking me whether I was traveling on a bicycle (probably worrying about his neighbors had it been a car). Thus, I was left to enjoying the cloudy landscape out of the panoramic windows and relishing my Brettljause.

It was fantastic. Two types of meat – the Schweinsbraten (called “Brüstl” around here) and the Geselchtes – were served thickly-sliced and provided for most of the “volume.” The salami, cheese, Speck and ham were, on the other hand, thinly sliced and not too plentiful. The salami was the most interesting part, obviously home-made and very strangely cut into long thin slices. The “Streichwurst” (“spread sausage”) was, as expected, heavy on liver, but not so much as to disgust me. However, while the Liptauer did not impress me much, the other two spreads – the Schmalz (called Brattlfettn around here) and the Verhackertes – were so good that had they been the only ingredients present, the Brettljause would have still earned an above-average score.

I hate to repeat that Styria is the El Dorado for Brettljausen, but when saying that I always thought of the Upper Styria (Ramsau am Dachstein and its surroundings). Now I am starting to think that the South Styrian Heurige just off the super-touristic “wine street” are quite on par if not better.