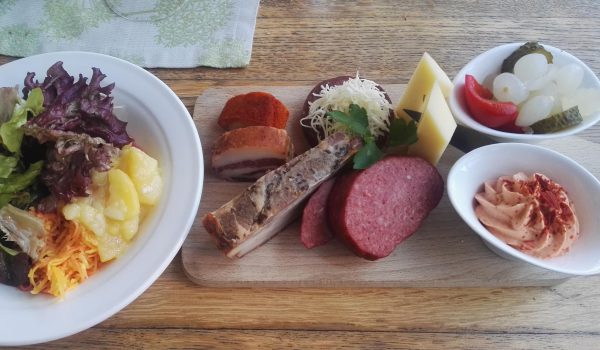 The more I try the Brettljausen of the area close to the Wachau valley in the Lower Austria, the more I see the similarities among them. The shyness of using wooden boards instead of plates, for one thing. Or – perhaps as a consequence of the above – the avoidance of the “Brettljause” term, the names like “Winzerjause,” “Hauerplatte” or “Wachauerjause” being much more common.

The “Riedenjause” (literally, “vineyard-snack”) of Ferdl Denk was a big and welcome exception. It did not look like much, but ended up being one of the most original and enjoyable Brettljause experiences of the year. The absolute highlight was the “Saumaise,” of course, which is apparently a specialty of the Wachau region that I have successfully managed to disregard over the past years. According to Wikipedia, it is a kind of minced and smoked pork meat, cooked with onions and garlic and served lukewarm. It tastes like a light lukewarm salami and makes a nice difference from the standard Brettljause ingredients.

The two types of thickly-cut Speck were great on their own, once I understood the need to separate the thick and unchewable skin. Both were perfectly spiced with garlic, but one also had quite a lot of paprika added to its crust. The cheese tasted like the mountain cheese of Vorarlberg: strong, dry and perfectly matching the wine. The Schweinsbraten, also served as a thick slice, were cold and very fat; they had what one may call an “acquired taste,” but the one I must have acquired quite some time ago, because I found them really good. Even the Liptauer had a slightly different color and taste from the usual Heuriger stuff.

The only other ingredient I omitted to mention was the Blunzen, which you can see on the photo above mostly covered by horseradish. In fact, had it been removed from the dish altogether, that would not have affected the score.

If you like Wachau, want to try something non-touristic and do not mind very friendly but slightly over-relaxed service, Ferdl Denk is a great place to visit. It certainly deserves its Top Heuriger award.