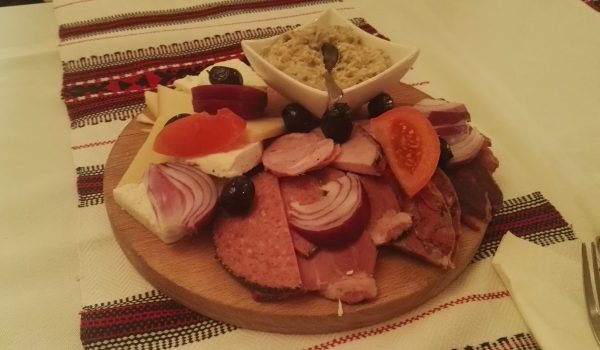 It took me a month and three attempts to review this Brettljause. The first time, when I visited Restaurant Bukowina in the beginning of January, I was so impressed that I gave it the ratings that would have placed Bukowina’s offering among the top Brettljausen of all time. Unfortunately, that visit followed a rather alcohol-heavy office party, so the next morning I woke up sure neither of the ratings I had given nor of what exactly I had eaten. The only reasonable solution was to pay the restaurant another visit.

The second time I was careful to note down everything I ate and not overdo with the wine. The result was somewhat disappointing: the Jause was still quite original, but not up to the expectations. That time, however, work commitments and a travel delayed my writing a review by more than two weeks, after which even my carefully compiled list of ingredients could not help me remember how good what I had eaten was. The only remaining memory was of the fresh onion and garlic that turned my post-dinner night into a nightmare.

Hence the third visit. This time the expectations were much lower but the outcome much more positive. Which does not mean reviewing this traditional Romanian meat and cheese platter is any easier for me. The problem is, you cannot describe something that is different each time, the same way you cannot paint a landscape if the weather keeps changing. As the waitress explained to me, this Bauernplatte is never the same. Which is a nicer way of saying that they build it out of whatever happens to be in the fridge.

Luckily, the fridge is usually full of quite unusual stuff, so here is a list of what you are likely to find on your plate. Cheese: at least three types were served on each occasion, including sheep cheese, goat cheese and smoked cheese. All of them had a strong taste, sometimes so strong that I had to combine the cheese with much more bread than habitually. Meats: a surprisingly edible pork jelly with a lot of pork and not much jelly; several types of Geselchtes of different fatness and dryness, but all with distinct and unusual taste; something resembling the Austrian Wiener sausage; and finally something Bresaola-like but not dry enough. The latter was presented to me as a specialty but finally was the most unpleasant thing to eat, since the texture made it extremely laborious to chew. Spreads: only one eggplant-based spread was consistently present all three times, and it was really fantastic, so much better than the boring Liptauer. Miscellaneous: no horseradish and no salty cucumbers, but that was hardly a huge loss since almost all the ingredients including the homemade bread and the olives were extremely salty by themselves. Actually, I would have liked to have more fresh vegetables than the provided two tiny slices of tomato. Instead, I got lots and lots of fresh onion, which was very welcome while combining it with the meats and excruciating the following night.

Finally, after three Jausen I can firmly conclude that Restaurant Bukowina is worth paying a visit to. The Bauernplatte may not be the best in the world, but it is still among the best in Vienna. The restaurant itself is quite small but reasonably cozy, as long as you do not mind the music that would not have sounded out of place at a Soviet song contest of the early eighties. I assume these were the superhits of the Bukowina region, although Shazam on my phone could not identify a single song. However, if you decide to come, do it sooner rather than later, because I would not be surprised if this restaurant disappears as suddenly as it appeared. It is beyond me why anyone had expected Romanian cuisine to attract tourists in the very center of Vienna, and honestly, it does not. At the last two visits, only a couple of other tables were occupied, and the people at them spoke Romanian. Quite possibly, they were the owners, or family members of the owners, or friends of the owners. So hurry up, for the Brettljause is worth it.