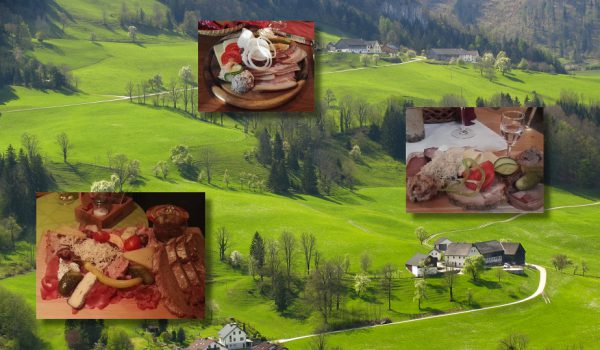 Another year, another Brettljause. 36 Brettljausen, to be exact. It’s 28% fewer than the year before, but let’s admit, a Brettljause every ten days is not a bad achievement, even without considering that I had to leave enough space in my stomach for four geese. Besides, by eating fewer Jausen I’ve managed to eat better ones, resulting in the average overall score of 6 out of 10. More often than not, I could enjoy better-than-average Brettljausen, with only three being truly sub-standard. The end of the year even brought an earth-shattering surprise.

But first things first. The third thing first, to be exact. The third place and the Bronze Brettl of 2017 go to the Mostheuriger Z’Gridling in Mostviertel. Although being probably too small and down-to-earth to earn the Mostbaron title, this authentic Heuriger serves a great selection of Jausen, which are completely on par with the offerings of its more famous competitors. Don’t go there in winter and you may enjoy it even more than I did.

The Silver Brettl of the year rightfully belongs to Waldstüberl-Weinhof Lamprecht in the South-Eastern Styria. My first culinary experience with that region was satisfying, educational but a bit scary, and if you are a staunch vegetarian, I suggest you keep yourself as far from Lamprecht as possible. Don’t even click on the link above.

Waldstüberl-Weinhof Lamprecht also scored best in terms of authenticity (that’s the slightly scary part I meant) and size. Besides thrashing the competition in these categories in 2017, it also managed to make it to the top 5 in the world. Not at all bad for a small hut on an unexceptional hill over a ghost town. Visit it on a warm day in mid-autumn, if you can.

Interestingly, the winner of this year’s competition also has its roots in the South-Eastern Styria. Although the recently opened Steierplatzl is located in the very center of Vienna, its friendly hosts come from Styria and are obviously very knowledgeable in the dark magic that makes Styrian Brettljausen so special. The quality of that particular one literally blew me away. It almost sounds unfair that something so good could be easily reachable by accidental tourists who might not have heard about Styria at all. I hope that after trying this Brettljause and other specialties they will study the map of Austria and run to the train station to buy tickets for the south.

Steierplatzl wins this year’s awards for the taste, variety and value and jumps to the third place in the world overall, as well as in the taste and variety categories. It also confidently marches to the top spot among Vienna’s Brettljause locations. Make sure you try it before the owner decides to abandon Vienna for good and move to the top of some Styrian mountain with a panoramic view, where the restaurants like Steierplatzl are normally expected to be found.

Two other Viennese restaurants are worth mentioning. Amadors Wirtshaus & Greißlerei is a super-expensive fine dining restaurant, replacing the good old (and also quite expensive) Die Winzerei, formely known as Hajszan Neumann. Its Brettljause is, however, relatively affordable and contains high quality and very tasty ingredients, earning it the third place in Vienna. The fourth place among Viennese Brettljausen is now occupied by Vogelbauer Bier- u Weingarten, an obscure and basic, but very quiet and traditional Heuriger in the 22nd district. Suddenly, the Austrian capital does not look such a hopeless location for Brettljausen, after all.

A honorable mention of the year goes to the Deisinger Hof, an authentic place so far away that I doubt I will see it again any time soon. Go there just to try all the weird things that inventive Upper Austrians can do with a potato. While on it, enjoy the best atmosphere and service that I’ve experienced anywhere this year.

If, on the other hand, you are in a masochistic mood, the anti-recommendation of the year is to pay a visit to the Restaurant Zum Weinkrug in Oberlaa, a journey that has just become very convenient because of the underground line extending in that direction. Had there not been other reasonable good drinking and dining places in the area, I would have seriously questioned the wisdom of spending millions of taxpayers’ money to bring them to a place with such a poor Brettljause. On the other hand, hardcore masochists may find the Weinkrug not bad enough to draw enjoyment out of its badness. Which, in turn, should make them deeply upset and thus satisfy their masochistic needs in a derivative fashion. Masochism actually sounds like a highly confusing thing.

That’s it for 2017. To give you a little hint of what to expect in 2018, it has started unexpectedly well, involving an obscure restaurant in the middle of the city and a certain Southeast European country. Whether the first Brettljause of 2018 will also end up being the best one will only become known in a year’s time. Until then – love, peace and Grammelschmalz.