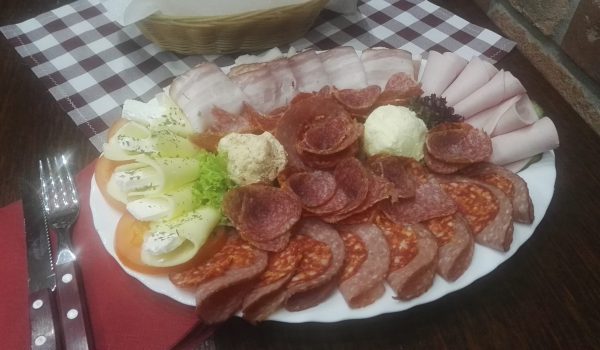 While the world is watching the athletes competing in the Winter Games in PyeongChang, I seem to be involved in the Olympics of my own: to taste all the international versions of Brettljause available in Vienna. Having tried Romanian, Hungarian, Italian and Croatian varieties (with mixed success), I am off to attempt something Serbian at Homolje Grill.

I make sure I am quite hungry, because the one thing I know about Serbian restaurants is that they generally serve a lot of food. With the menus of some of them containing dishes named “one kilo of grilled meat,” it is quite obvious which option Serbs are likely to pick when faced with the quality vs. quantity dilemma. For that reason, I find it rather worrying when the waiter, upon hearing the words “Kalte Platte” shakes his head and warns: “It’s quite a lot of food, you know.”

He is so right. At 12 Euro, the dish may look expensive, but quantity-wise it can serve as a very filling starter for four persons. Given time, two people can probably finish it, providing they take nothing else. Despite my hunger and experience, I am just over the half when my body tells me, “Enough is enough.” I have no regrets though, as I have tried each and every ingredient, and continuing would only mean more of the same.

Looking at these cuts coldly (this was a very bad joke, I know), they are totally of supermarket breed. The two spreads may be the exceptions: the white one tastes like a salty garlicky butter, and the pinkish one is like a gourmet Liptauer with more garlic than customary. The meat part is heavy on salt, featuring two hard salami types, a paprika salami and a Wiener sausage. The Jausenspeck is the tastiest part, despite its supermarket nature, while the Extrawurst tastes slightly unusual, probably being the cheapest Extrawurst the restaurant could find. There are two types of cheese, a tasty goat cheese served wrapped in a tasteless Emmentaler, and somehow this combination works very well. Putting a slice of paprika salami on top of a Wiener is another innovation that does more than simply making the plate look attractive. However cheap the ingredients might be, it is noticeable that this Brettljause did require some effort, and that is certainly commendable.

As for the restaurant itself, it is unassuming but pleasant enough, and if you are lucky to visit it at a time when it does not have musicians performing Serbian songs in an unbelievably crappy way, you may enjoy it more than I did. Still, if you do not have at least three friends to accompany you, avoid the Kalte Platte.