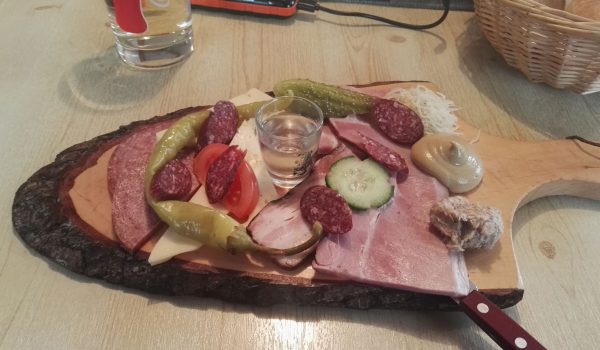 If you want to remember just one rule of eating Brettljausen, make it “don’t order one unless you are hungry.” Of all people, I should have known that, yet I broke the rule stupidly by walking into the Ederstub’n only two hours after having finished a cheese plate at the wonderful Walcheralm. Somehow I hoped that a fast walk down the mountain would remove the weight from my stomach. It did not, and before I could reconsider, my mouth already said “Most” and “Brettljause” to the young waiter speaking incomprehensible dialect. The rather low price and the fact that the Jause came with a complimentary Schnapps made me believe it could not be too big.

It was not too big, to tell the truth, but just looking at it made me sweat. Thus, I’ve tried everything: cutting off tiny pieces, eating slowly, drinking a lot and not touching the bread. Still, I was only one-third through and seriously considering to give up, when the help came from an unexpected source: a hairy gray cat, who had been sleeping peacefully on a chair at a table nearby, suddenly opened his eyes, noticed my suffering and gracefully set off towards me, while I was already cutting a slice of Geselchtes for him. 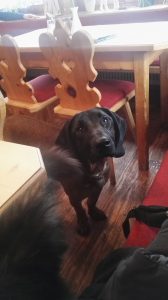 The cat was slowly enjoying the treat when a dog came out of the kitchen and stole the meat from under the cat’s nose. Before I could cut another piece for the upset cat, a second dog came out and joined my table on the other side looking at me with his sad dog eyes. 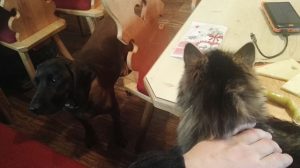 As a result, the Brettljause of Ederstub’n is best described in terms of what I did not eat, but merely tried before feeding most of it to my new furry friends. These were: Geselchtes (very tasty, certainly home-made), Speck (quite fat, but good), cheese (standard and boring), Verhackertes (fat, salty and good), hard thin salami slices (well done) and a fat sausage resembling a Wiener (not so well done, but fully acceptable).

When the plate was empty, the dogs, who, I thought, were swallowing everything without looking until I offered them a Pfefferoni, stayed by my table for a couple of minutes looking disappointed. The cat, on the other hand, jumped on my knees and remained there happily purring while I was busy tasting the various Schnappses’ ability to dissolve excessive food. Vogelbeerenschapps worked best, by the way, being the strongest and the most expensive.