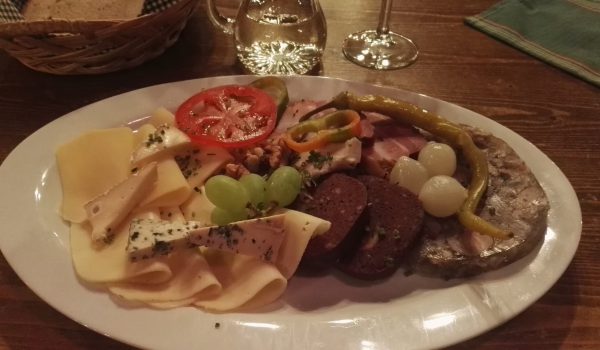 There are two things that can be said about Illmitz. First, it’s home to hairy (and tasty) Mangaliza pigs. Second, it’s very close to Hungary. The first point implies Mangaliza-speck, Mangaliza-ham and Mangaliza-schmalz. The second means the abundance of spicy Puszta sausage.

Needless to say, when deciding to enter a place called Pusztascheune (Puzsta-barn), having just arrived in Illmitz by bus, it was the latter that I looked forward to finding on my plate, along with the Kümmelbraten, Grammelschmalz and Leberkas, promised by the menu. Look at the photo above, and if you notice any of the listed, please let me know and I’ll make an appointment with an eye doctor (and possibly a psychologist).

To be fair, I should have paid more attention to the menu, which said “Pusztascheune Wurst” rather than “Puszta Wurst,” which, in theory, could be any type of sausage that the restaurant considered its specialty. In practice, there was no such sausage. There was an enormous and scarily grey head cheese (pork jelly), two huge slices of black pudding, a few slices of cold Schweinsbraten (with no sign of Kümmel, or caraway seeds, but full of cartilage) and two thick slices of Jausenspeck, straight out of plastic.

OK, maybe I am being too harsh, and the Speck did not come out of plastic (even though it tasted exactly like the Speck I buy at a supermarket). After all, the menu did say that each and every ingredient came out of Pusztascheune’s own production – though I can bet that the Gongonzola cheese did not. Still, let’s try to be positive: The Speck was quite good, mostly as a welcome change after the ghastly jelly and the Schweinsbraten. The cheeses had some taste, and having a few grapes and walnuts around was a nice touch. Finally, the restaurant itself was kind of cool: it really is a barn, with one gigantic room inside and a thatched roof.

The problem is, there is no particular reason to go back there.