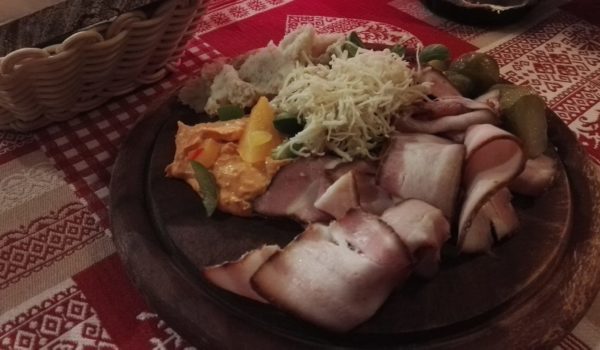 Altes Zechhaus in the wine village of Gumpoldskirchen has always been a place I wanted to visit but could not: either because it was closed or totally booked. Finally, I had my luck today; because of a wine festival all the way from Bad Vöslau to Mödling, people preferred to have their drinks outside, leaving me a spare table to try the Zechhaus’s Winzerbrettl.

The first thing that hit me while placing the order was English: it was everywhere. Fortunately, there were no musicians around playing The Blue Danube Waltz, but otherwise I almost felt like being trapped in a super-touristic Heuriger in Grinzing. Most of the people around me appeared to be more interested in eating than drinking, ordering various hot dishes from the restaurant’s long menu. On the other hand, perhaps they knew something about my Brettl that I did not: namely, that it was nothing to be excited about.

Consisting of just three ingredients – Liptauer, Grammelschmalz and thinly-cut Speck – the Jause looked like a quickly and lazily arranged starter. While the spreads were OK, the Speck, which I had to eat without the bread (it had all been used on the spreads despite my ordering an extra slice), was neither salty nor spicy, just very, very fat.

It must have helped that I visited the Zechhaus after having already had a few glasses of wine and a snack at the festival. It made the noise and the crowds more bearable and my initial impression of the Brettljause more positive than it deserved. Three days later, as I am writing this, I see my returning to the same restaurant no more likely than going to a typical Heuriger in the 19th district.