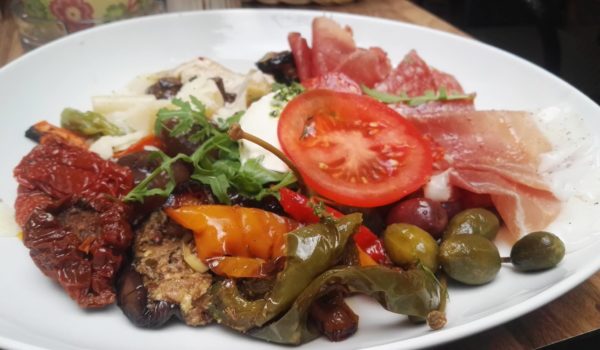 After the spare ribs disaster that I had experienced in Wels, some people in my place would have left the town never to return. However, still quite hungry after a long hiking day with neither breakfast nor lunch, I had decided to give Wels a second chance and headed to the In’s Haas Café, whose online menu featured something interesting called “Haasplatte.”

It took a few rounds of the town’s tiny center to discover the well-hidden entrance to the courtyard housing the Café, but the end result was well worth the effort. The “Haasplatte” was hardly a Brettljause, but it was anything but bad.

What it was, was a rather large and well-designed plate of Italian antipasti served with fresh bread. The antipasti were heavy on dried and pickled vegetables, and those were actually extremely enjoyable. Even the cold-served grilled and pickled mushrooms were good. On the other side, there were bits of tasty cheese, a slice of tasteless mozzarella (I am saying this in a positive way, because a tasty mozzarella is something that can probably make you very sick), prosciutto and a few types of salami.

As a snack to accompany wine (and In’s white house wine is really good), the Haasplatte is perfect. One may argue that it has no place on a Brettljause site, but on the other hand, it has cheese, sausage and tastes better than many sloppy Jausen out there. As a minimum, it has redeemed Wels in my eyes a bit.