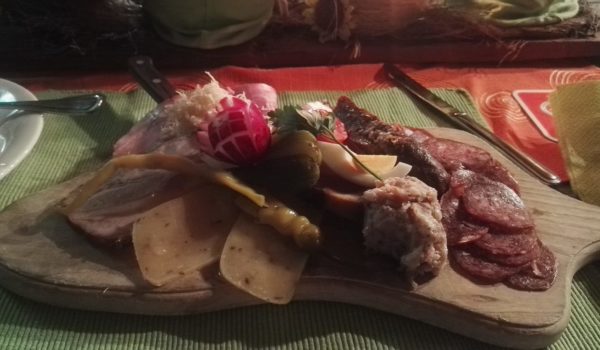 I wish one had blinded me, put me in a car, drove all the way to Gasthaus Gatternig and put me in front of their Brettljause, asking to guess what area of Austria it came from and promising a few thousands of euros for the correct answer. I would have said something like, “between Styria and northern Italy, but closer to the latter, and not too far from the land of Salzburg – and be a few thousands of euros richer, because that describes the location of Villach pretty well.

Gatternig, suggested to me by Google as the top result for the keywords “Villach” and “Brettljause,” serves a Jause that has elements from all three of the above areas. The Italian influence is the most obvious one: the thick slice of Speck is an identical twin of the Speck present on the Marenden of South Tyrol, including the skin that one has to cut off and the fact that the thinner slice one cuts, the better the taste becomes (fortunately, the supplied knife was more than capable of cutting through the tough meat). The presence of salami was another nod towards Austria’s southern neighbor.

The Salzburg’s part was much subtler: whereas Marenden traditionally have some mountain cheese (Bergkäse), the “Glundner” cheese of Gatternig was more like the grey cheese (Graukäse) popular in Salzburg and Tyrol, but less “wobbly,” tastier and cut into thin slices. Personally, I think the way it was served here made it much easier to accept.

The three other ingredients – the Schweinsbraten, the Geselchtes, and the Verhackertes – would not have been out of place on a Brettljause in Styria. They were heavy, tasty and so authentic, that having them served that close to the city center felt strange. The Schweinsbraten suffered a bit from the presence of cartilage, but fortunately it was easy enough to spot before it reached my teeth.

However, it was the final ingredient, the Hauswurst, that placed the Brettljause firmly into Carinthia. These thick sausages, with dry cracking skin and smoky-juicy insides are typically present on Carinthian Brettljausen and much more seldom on Styrian ones. One can buy them at selected Christmas markets and during various festivals in Vienna, but as part of a Brettljause they are a hundred times better.

For one time, I have to thank Google for suggesting a restaurant that I would have never thought of visiting otherwise. The Gasthof looks like nothing on the outside and even less inside, and not even its half-cozy inner courtyard would have encouraged me to try it. Thanks to Google’s recommendation, I’ve got a more-than-acceptable Brettljause and a couple of thoroughly enjoyable dark beers.