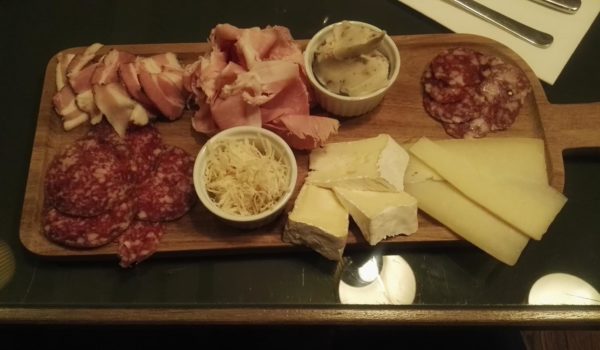 For me, Christmas in Vienna has always been associated with empty streets and closed restaurants, and while the former was kind of welcome, the latter was a pain in the butt. Now the empty streets have become a thing of the past, as even at midnight of Christmas Eve the first district remains crowded and quite noisy. Closed restaurants remain a problem, however, because most of those remaining open belong to the category of touristic restaurants I would not consider visiting even had their dishes been free. Finding a restaurant serving a Brettljause is even more difficult, of course, and kudos to the Cottage for being available at this time of the year.

On the other hand, finding some fresh bread during the holidays is not a big deal. I visited a Ströck at Westbahnhof today and bought a perfectly fresh roll there. For some reason, that proved too difficult for Cottage’s owners. The bread that I was served with the Brettljause was not only not especially fresh, but one tiny step away from stale. It was so unpleasant that at the end I decided to forget it and stick to cheese and ham instead. The weird thing is, a few seconds in a microwave would have solved the problem perfectly, so why the restaurant has decided to screw up so badly is beyond my understanding.

The Brettljause itself promised the ingredients from Vienna’s ham-king Thum, which should have explained the premium price. The ham was indeed of Thum’s high quality, and although I was not very familiar with Thum’s salamis, the two types included were not bad at all, but the few thin slices in which they were represented did not help leaving a strong impression. The Grammelschmalz, though having an almost delicate taste, was too cold and hard to cut, not to mention appreciate, and made me think of how much more welcome an absolutely normal, creamy butter would have been. The Speck left a similar feeling – while probably good, it did not have anything in it to convince me it was better than a Bratenspeck from BILLA. Finally, the cheese was certainly not of Thum’s making, and Cottage’s decision to include two rather tasteless sorts was not great.

Having known the name Daniel Moser from the traditional coffee house in the first district, I had to try an espresso at the end. It was quite good – better than most Viennese coffees – but not so good as to encourage another visit. Despite a good location and friendly and efficient service, the Cottage looks very boring inside and serves an equally boring Brettljause.