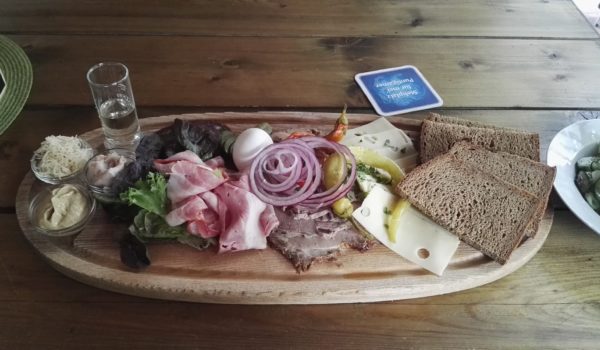 Of all the suburbs of Vienna, Kaiserebersdorf in the 11th district is one of the suburbiest. Located behind the central cemetery and just a couple of kilometers away from the airport, it is home to soulless apartment blocks, uninviting cafes, endless warehouses and greenhouses. Its main sight, the Kaiserebersdorf palace, serves as a prison these days. It takes ages to get to by public transportation, and after mere five minutes, you want to go back as there is absolutely nothing to see or do.

Among all this dullness, Hopfen & Malz looks like an oasis. It’s surprisingly quiet, rather quaint and serves a tasty mixed salad and quite a few types of beer, including a highly drinkable Dunkles. It even has a Brettljause on the menu, which was the main reason for my visit in the first place.

Even without the salad and the two liters of beer, the Brettljause of H&M would have been hard to finish. At a first sight, it looks much smaller than it really is, since the few slices of Speck and cheese shroud this Jause’s main ingredient: the cold Schweinsbraten. It is impossible to notice it on the photo, but there must be half a kilo of Schweinsbraten on the board, and they are seriously good, having a perfect mix of meat and fat and tasting exactly how Schweinsbraten should: cold and fresh, but not too fresh.

The other ingredients, including black pudding and Grammelschmalz fade in comparison and feel like side dishes, but quite filling side dishes nevertheless. The Schnapps that comes together with the Brettljause is there for a good reason, and it is a pity that I have managed to spill half of it out of sloppiness. After a dish like this, one really needs the Schnapps to help the digestion, even if only psychologically.

Hopfen & Malz is not going to revolutionize the world of Brettljausen, but it was almost worth spending three-quarters of an hour in a tram to Kaiserebersdorf. Besides, it was the second place ever that served a Brettljause with a whole egg still in its shell, which is a mini-revolution by itself.