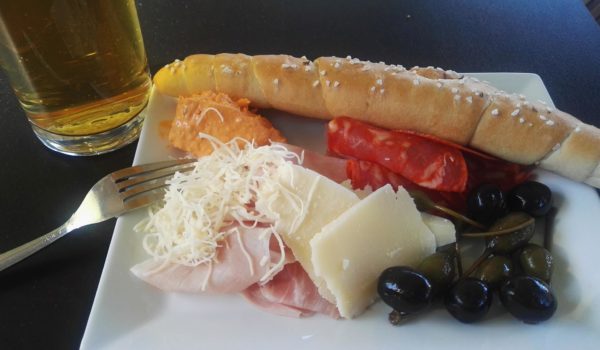 These days the square and the park in front of Vienna’s City Hall are so rarely free of public events of some kind, that sooner or later someone is going to come up with the idea of celebrating such occasions by staging an “empty Rathausplatz festival.” The summer film festival is one of the longer-running events, and I still have pleasant memories of the few first ones, which were a great combination of relaxing summer evenings, classical music and large quantities of beer.

In the recent years, with the music offerings getting more varied, the beer more expensive and the whole place much busier and noisier, I usually visit the festival long before the performance starts to have a glass of wine and to look for Brettljausen. Two years ago, I was surprised to find something actually good and am now looking forward to visiting the vendor’s deli in the city center.

This year, I was not so lucky. On the film festival’s official website, Zum Stöger presents itself as specializing in Brettljausen. It was therefore a bit discouraging to see that my order put the lady cook off balance and made her flip through the menu’s pages to find out what exactly should be part of the Winzerjause. To be fair to her, this was the festival’s opening day, so perhaps I was the first customer ordering that dish.

The preparation, which I unfortunately had the displeasure of witnessing, took about three minutes and involved taking a few slices of ham and chorizo out of a plastic-covered plate, adding a couple of thick slices of cheese and a small ball of Liptauer to it, and finally decorating the plate with a few olives and capers and some horseradish out of a huge bucket. Realizing that the restaurant had just earned more than 8 Euros in three minutes, made me seriously question my own choice of profession. And those 8 Euros did not include my beer or even the bread. How they expected me to eat the Liptauer without bread is a mystery.

While they lasted (which was much less than three minutes), the ham and the cheese tasted good, but that could not change the pointlessness of the whole idea. This Jause was not even a starter; at best, it was an overpriced aperitif.