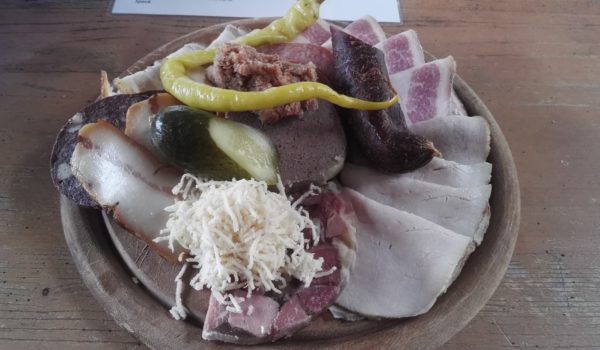 Of all the ratings I use for Brettljausen, the first one, called simply “Brettljause” must be the least clear of all. I actually thought to call it “taste” at first, but decided against that – there are other factors besides taste that make a Brettljause enjoyable to eat. How different ingredients work together, for example. Whether there is a fair balance of meats and pickles. Whether there is an annoying skin or cartilage that need to be fished out. Or even how nice the dish looks. Basically, the higher that rating is, the greater is the chance that I would recommend stealing a small sample of that Brettljause, going to some extremely dull place and eating it there without being especially hungry.

At the end, however, the taste is certainly the most important criterion, and is also the most subjective one. The reason I am saying all this is that the Schmoizgruam’s Brettljause is great in nearly everything except – in my very subjective opinion – taste. I intentionally started by eating the ingredients I like least – the liver sausage, followed by the black pudding, followed by the head cheese  – and very quickly got annoyed by how overrepresented those ingredients were. Just finishing the above three required a half of the huge bread slice that came with the Jause and one and a half Krügerls of Most. And their taste brought no pleasant surprises: the liver sausage left no doubts about what it was made from, the black pudding reminded of nothing but blood, and the brawn hardly had any taste at all.

The disappointment, however, came later as I moved on to try the other ingredients and realized that I did not like any of them. The Speck, very salty and so white that it was more of a lard, had a thin but hard skin that I put into my mouth by mistake. Cutting it off the remaining slices was an unpleasant experience since only the knife was provided, and holding the Speck with the hand inevitably made the fingers greasy. The Schweinsbraten also suffered from the skin problem and, like the Speck and the Geselchtes, contained far too much fat. The “gray meat” (it might have been Kümmelbraten but with no sign of caraway) had a weird leathery taste, like a shoe sole. The Verhackertes lacked flavor and besides had a rather unappetizing pinkish color. Even the Hauswurst, which is normally very hard to screw up, was too hard to chew and not tasty enough.

The sad thing is, in everything else, Schmoizgruam was great. It is a real farm, with all the ingredients coming from the own production. The service is nice and friendly, the size of the dish is impressive and the price (5 euros) is super-low. Some people may even like the taste, and if you think you might be one of them, you are welcome to try and later bash this review on your own website. To finish on a positive note, however, this Mostheuriger is better than Kobermann in the nearby village of Küb, though, I suspect, both farms belong to the same family.