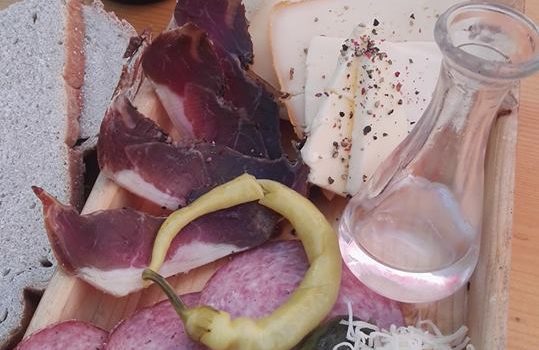 Compared to the mighty Krimmler Achental, the Habachtal is a short valley. Okay, it’s a pretty long valley, going all the way up to the glaciers, but for a normal person, that is not a mountain climber, the interesting stuff finishes somewhere half-way. For those who persist, there is a hut at the end and some 1000 meters higher, but spending three hours climbing to get there is outside of my notion of fun.

For such a short valley, Habachtal can be considered quite rich in two respects. First, it’s full of marmots, who, as far as I am concerned, are one of the top reasons to go to the mountains in the first place. They are not easy to spot, but their whistles are everywhere. Second, it has as many as three Brettljause places, located within a 30 minutes’ walk of each other.

Alte Moa Alm is the one located deepest in the valley (which is, admittedly, not very deep) and looks much “uriger” than the other two (which look like, and probably are, hotels). It’s an authentic 18th century hut, which has recently changed owners, and does not claim to do anything special like serving self-made cheeses or meats.

What is serves, however, is absolutely OK. Perhaps it was the trick of cutting the ingredients a bit thicker than usual, or delivering the dish on a sophisticated structure of two boards with complimentary schnapps in a strange little bottle, but the Jause tasted authentic enough to be thoroughly enjoyable. The two types of mountain cheeses were the best part, going beautifully with the fresh bread (I saw a bakery’s truck delivering it shortly before my arrival) and the butter. The very salty Speck was a bit hard to chew, but that element of struggle only made it better. The fat Wiener-like sausage was the weakest link, but added a bit of volume and taste when put on the same slice of bread with the cheese.

Unless you are brave enough to climb all the way up to the alpine hut, Habachtal is a nice relaxing destination for a half-day trip. Next time I am certain to try one of the other two restaurants for the sake of variety, but I am quite sure that Moa Alm is absolutely on par with them.