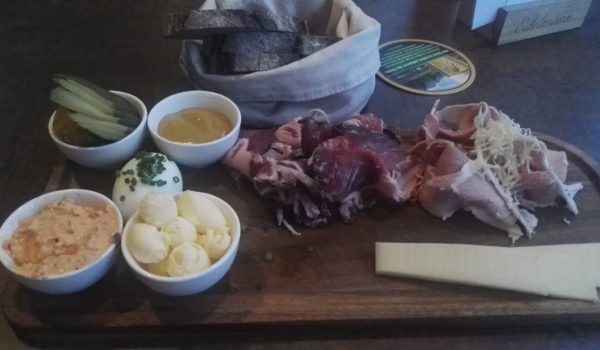 There is a thing in IT called usability testing. It is when you build a working version of a system, put clueless users in front of it, and watch in horror how they are managing to break everything you thought was rock-solid and misunderstand the most obvious. Doing usability testing early in the software development process is supposed to ensure that the final product will not drive all the users mad.

I wonder if restaurants routinely perform similar tests with their dishes. Somehow, I very much doubt that Edelmann has done that with its Brettljause. Otherwise, I do not understand how one can serve so much butter, Liptauer and very sweet mustard with only three small slices of bread. In theory, one can put butter and Liptauer on the same slice, of course, but there is no way one can combine butter with mustard or Liptauer with mustard, and anyway, there is also Speck, ham and cheese to fit somewhere.

Finding the most efficient way of managing the ingredients of Edelmann’s Brettljause requires a lot of planning and concentration and almost distracts one from the fact that the ingredients are actually very good. The ham comes from Thum, which is probably the most famous producer of ham in Vienna. The Schinkenspeck was a Mangaliza pig in its previous life, and is very much different from any other Speck: it is fatter but also very tender, tasty and – hard to believe – does not get stuck between the teeth. The mountain cheese, while not particularly special, had some taste. Only the Liptauer was slightly disappointing by being a bit watery and not spicy enough – a small deficiency compensated by having an entire boiled egg to accompany the Brettljause.

I think Edelmann’s intention was to create a gourmet Brettljause, by including unusual and good quality ingredients, arranging them nicely, and charging a premium price. The result was, generally, a success, but doing a bit of testing beforehand would have helped avoid glaring problems with the balance.