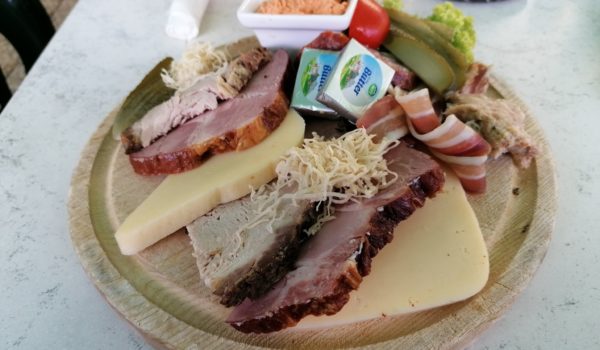 The village of Tauplitz is a Mecca for Brettljausen. Leaving the chairlift at the upper station of Tauplitzalm, one is immediately faced with a wide choice of Brettljause places, and the classic “six lakes” hike reveals a number of others. The restaurant of the Hotel Hierzegger is one of the closest and the most obvious destinations, which does not mean it is not good.

Come on, we are on the Styrian territory here, and the Brettljausen are simply not comparable to those of Vienna, Lower Austria, and – let me say something sacrilegious – East Tyrol. It is a totally different dish altogether, and more often than not, it is brilliant.

What distinguished the Jause of Hierzegger from what I had seen before was the fact that almost everything on it was featured twice: two thick slices of Schweinsbraten, two thick slices of Geselchtes, two thick slices of cheese, two slices of bread – even the horseradish was served as two separate portions residing on the opposite sides of the board. Perhaps it was a Brettl for sharing, but at the end I was absolutely happy that I was alone facing it.

The Braten and the Geselchtes were epic. As thick as the bread slice, they were perfect when eaten with the bread, some butter and a bit of horseradish. I can live on this stuff. Sadly, the other ingredients did not quite reach that level of excellence. The cheese had unfortunately no taste, so did nothing more than fill up my stomach. The Speck, served in thin slices, was quite fat and extremely difficult to chew. The Liptauer was enjoyable because of the unusually big onion pieces inside but did not impress with the taste. The ingredient called “hard sausage” in the menu was not hard at all, tasting like a sliced Tyrolean sausage from a supermarket. And the Schmalz was not spicy enough to make it special in any way.

I am being picky, of course, but the Brettljause could have been much better. Even serving the butter unwrapped (an activity requiring about 6 seconds of the cook’s time) would have improved things. So what we have here is a really good Brettljause when compared to many others, but not as good as it could have been with a minimal additional effort. If I were to visit Tauplitz again (which is quite a likely option), I would try a Brettljause elsewhere.