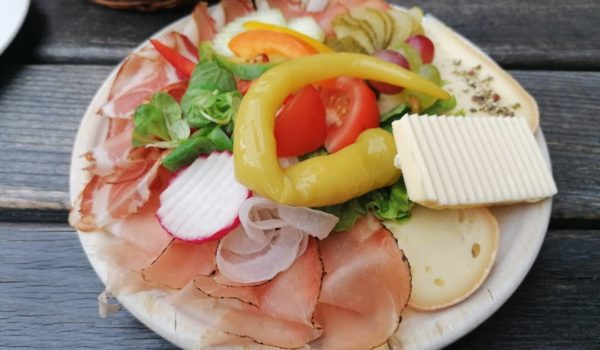 Another day, another valley. Compared to Untersulzbachtal, the nearby Obersulzbach is somewhat longer but is somehow easier to enter, having a gentler ascent at the beginning. There is also a parking space a few kilometers into the valley, so those with cars can save an hour of walking each way (but then suffer horribly having to restrain from drinking alcohol). Without a car and with a breakfast and a dinner at fixed times at a not-so-close hotel, I had no chance to reach the very end of the valley, but I managed to get to the Postalm, which is the most distant hut serving food. (Well, to be exact, there is one even farther on – the Kürsingerhütte – but getting there requires a fair deal of climbing and the chances of finding a Brettljause there are slim.)

That far away, I was not expecting more than a simple hut with lots of cow shit around it and, hopefully, a few marmots. What I found was a big, extremely well maintained house with a modern glass-walled room for holding seminars and presentations. There was no wi-fi (not even mobile phone reception with my operator), but still the Postalm was not at all what I had imagined.

Its Brettljause was also much better presented than one would expect at such a remote location. The cheese and the Speck were nicely arranged, and the slices of paprika, salad, radish and cucumber made the dish look attractive to compensate for its lack of variety. Three sorts of Speck and two kinds of cheese were probably included; “probably” because their appearance was quite similar, and I was too hungry to discern small differences in taste. However, the main thing is that the taste was good. The cheese was the strongest of what I had tasted in the Pinzgau region, and although Styria and Tyrol have stronger cheeses, for Salzburg this cheese was quite an achievement. The Speck was cut into extremely thin slices, which is important for the taste (and easy on the teeth). Finally, the horseradish was refreshingly fiery, and the locally produced butter was both fresh and delicious.

Today I had a choice of hiking to the Postalm or trying the Brettljause at the Berndlalm, which is another good-looking and friendly hut. That would have saved me two hours, but finally reaching Postalm was a good decision. Of course, I will have to go to Brandlalm, too, at my next visit.