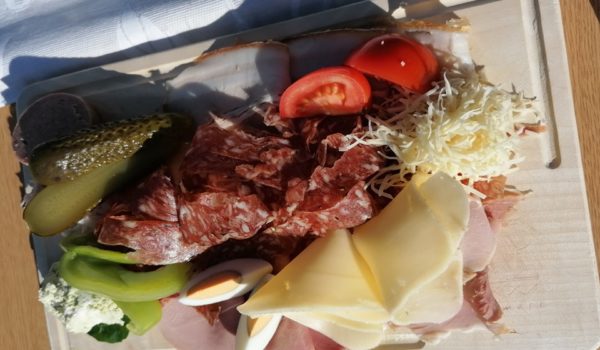 A second after the words “…and a Brettljause” left my mouth I knew I had made a mistake. The images of both of the yesterday’s Jausen formed in my mind, and it became clear to me a Brettljause was the last dish I wanted. It did not help that the breakfast at the hotel had only finished two a half hours ago. It was quite early for a drink and far too early for food.

At least I was alone, and the place looked really nice. I would have preferred to sit somewhere on the terrace and enjoy the view over the vineyards, of course, but all the tables were reserved. It always hits me as weird when restaurants stand empty but do not let anyone in because of reservations. Well, at least I was permitted to make use of a table with the reservation four hours later.

I was lucky, as it turned out. Just a few minutes later, huge groups of people started to appear from all directions, and by the time my Brettljause arrived, all the tables were taken. Reservation seems to make sense, after all, at least on the Austrian National Day.

But despite my obvious luck, I still did not want to eat, especially since the look of the Brettljause was anything but appetizing. A gray piece of a liver sausage lay dauntingly in the corner, transparent skin still around it. A lump of Verhackertes was nearby, looking as white as Lardo, for the likely reason of being shredded Lardo in the first place. The pumpkin spread, on the other hand, looked quite nice and healthy in comparison to everything else. What totally dominated the dish, however, were weirdly shaped slices of salami, which turned out not to be salami at all, but a long salty sausage cut along its length.

OK, as I said, I was not hungry, so for fairness sake, my evaluation below is based on the assumption I would be presented with the same dish at a different time. I don’t think I would have finished the liver and the Verhackertes anyway. I might have handled the pumpkin spread, though despite its healthy look it was too filling and not very tasty. The skin of the Schweinsbraten (or the Brüstl, how they call it in Styria) would have definitely bothered me, too, for it is never nice to send a slice of meat into your mouth expecting a crunchy crust and then having to pull the unchewable skin out. The Geselchtes and the boring cheese were the best parts at the end, for the pseudo-salami, once I discovered what it was, did not impress.

Just to make things worse, the groups at the other tables became quite noisy with the kind of noise that happens when several people start talking at the same time without bothering to listen to the each other. I was actually quite happy to leave.

Yet, at the end of the day, it was all my fault. It was my mistake to come too early, and my mistake not to get the point when faced with an overbooked restaurant and stay despite that clear message. I am sure that under different circumstances, I would have enjoyed Tinnauer much more. Give it a try, if you are in the area. I’ve heard it serves much more than Brettljausen anyway.