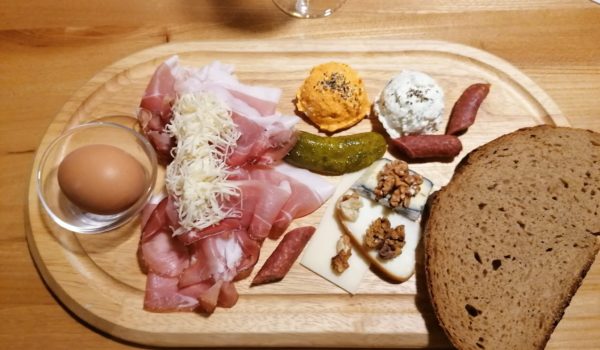 If you plan to visit one of the many Heurige in the village of Enzersfeld, seriously consider taking a bus. Enzersfeld may not look far from Vienna’s Stammersdorf on Google Maps, and it’s probably really not far kilometer-wise, but once you cross the city’s border, you will be faced with such a boring walk along the road that the time would seem to stand still.

The Brettljause of the 20ers looked small, but then one cannot expect more from something costing less than 7 euros. On the other hand, the actual cost of the ingredients must have been one-third of that at most. The Speck did not taste special, the little Kletzerl sausages came from a supermarket, and the three slices of different cheeses, while tasty, were laughably tiny. The two balls of spreads – a Liptauer and a white herby one – were easily the best parts, but far too big for the single slice of bread included. Putting a mountain of spread on a small piece of bread is not the best way of enjoying it.

But there was an egg. A full egg, still in its shell, which is quite a rarity on Brettljausen. I like hard-boiled eggs, and always keep one or two in the fridge, but like many people, I thoroughly dislike the process of removing the shell. It often just takes too much time and effort when compared to the pleasure of eating the egg afterwards. However, I have never peeled an egg like the 20ers’. I don’t know how they cooked it (and don’t want to know), but the egg-white beneath the shell was extremely sticky. After a couple of minutes of fighting, my fingers were covered with small bits of shell and egg-white and sticky as if I had spilled glue on them. The egg itself looked pitifully scarred and not at all appetizing. Eating it did not kill me at the end, and I suppose I should be thankful for that.

The Heuriger itself was quite sweet, though. The Welschriesling I drank was actually very good, and I would have stayed longer, but the number of people and the noise around me was starting to become annoying. The Heuriger is only open on Fridays, so keep that in mind if you plan to visit. And avoid ordering eggs.