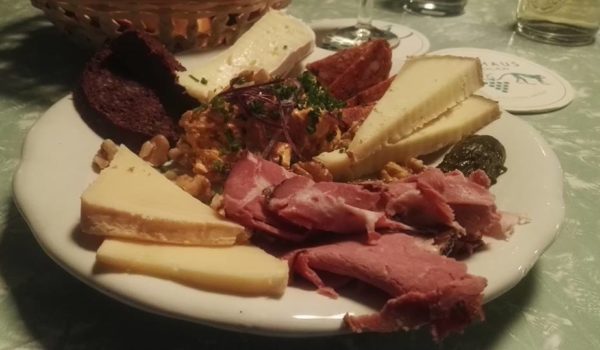 It was my first visit to Weinhaus Pfandler, and I was a bit afraid. The area around the Meidling railway station is far from being the nicest place in Vienna at any rate, and in addition, the online review of Pfandler from which I discovered that it had a Brettljause stressed that the establishment was as “old Austrian” and “old Viennese” as one could possibly get. Thus, standing on the dark street outside the “By the Blessed Monkeys” (“Zu den Seilige Affen,” which is the tavern’s second name), I was looking through the windows expecting to see elderly working class Austrians smoking and getting pissed on cheap wine and bottled beers.

I saw none. Although the location looked extremely unattractive (hence the low atmosphere rating), the clientele was quite young and well-behaving. The stuff they ate looked simple but well-presented, and the short menu was rich on good and not at all cheap wines. It looked as if a once disgusting Beisl was taken over by a new owner who decided to push it into a different direction. Which may very well be the case.

Anyway, the “mixed plate” was a much better Brettljause than most tourist-oriented Heurige of Vienna offer, containing – as the menu claims – ingredients coming from some quality producers. The cheeses included three thickly-cut types, two of which were hard and tasty and one creamy and less interesting. The Liptauer spread was one of the better ones I have tried, the tiny pieces of pickles inside making in pleasantly crunchy. On average, the meats were less exciting than the cheeses; the Geselchtes was excellent, but the Blutwurst and some sort of dry salami, while non-industrial, did not taste of much.

My main criticism is that the Brettljause was rather poor on the pickles side. Only one tiny cucumber was included, and although the restaurant offers a separate small plate of pickles at an extra cost, one feels charged for something that should have been part of the Brettljause in the first place. The same is true for bread, too: each slice is at extra charge, bringing the total price of the Brettljause to an amount that is excessive in spite of the dish’s good qualities. Serving a Liptauer spread with no bread included is a bit silly.

If you are looking for a Brettljause with tastier-than-average cheese and do not mind the slightly weird location and décor, Weinhaus Pfandler is a viable option. I cannot heartily recommend it, but I may very well have a glass of wine there again one day.