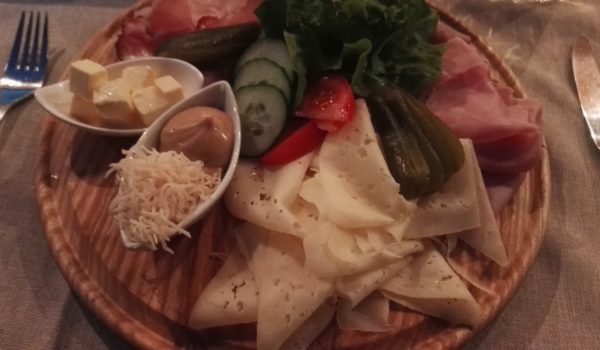 I have to admit, I never write my reviews right after eating a Brettljause. Very rarely I write them the same day. What I do try to do is to record the ratings as soon as I can, because that stuff tends to evaporate from the head extremely quickly. On a few occasions I even had to go to the restaurants for the second time simply because I did not remember what the hell I had eaten there.

Today this is going to change, because I have just ordered a Brettljause, and I conveniently have my notebook with me. The restaurant is Lanzenhof, a place I am visiting for the third time in four days, which has as much to do with its convenient location as with the fact that I quite liked its friendly atmosphere the first two times I’d been there. So here I am, reporting live. Or at least trying to.

The Brettljause is not on the menu. They offer a Speck plate and a cheese plate, but I bet I saw someone yesterday being delivered a mixed plate. So I ask for one (a small one, since I am still trying to recover from a heavy dinner at the hotel). The super-friendly waiter agrees without hesitation. I concentrate on the wine.

The Jause has arrived, and the first impression is that it’s big. “I’ve told the cook you want a small one,” says the waiter apologetically. It’s fine with me.

A quick examination reveals a few slices of cheese with holes in it (a Tilisiter?), Speck, very industrial-looking ham and the Schweinsbraten. The first Schweinsbraten I’ve seen during my three-day stay in Tyrol. There is a lot of horseradish, too and even mustard! I’ve almost started to believe that mustard was not part of Tyrolean culture.

There are also little white cubes of something suspicious. Is it goat cheese or is it simply butter? I send one cube into my mouth using a fork. Damn, it’s butter. The second cube gets spread over a slice of bread.

Bread, butter and cheese. The bread is not particularly fresh, but it will do. It’s more unfortunate that the cheese does not have much taste. From the depths of the restaurant I hear a harmonica and a group of elderly Austrians testing their yodeling skills. They are not very impressive.

Eating another slice of bread is going to make me explode. Let’s stop with the bread then. The question is, what to do with the butter in such a case? Trying to wrap a cube of butter in cheese and ham. Not bad in comparison.

Tried the Speck. Yes, this is the real thing. Tyroleans know how to cut it, obviously. It’s almost like Italians’ knowing how to make their espresso. The Speck is salty and smoky and very thin. I should have probably asked for a simple Speck plate.

Continuing with the Schweinsbraten. They are getting better! Perhaps the first slice was an exception. The ham continues to stay dull, however. Finishing it as quickly as I can.

Regret to have eaten so much at the dinner. Most of it was salad, true, but most of the salads were meaty-sausagy type. Order a second glass of wine.

Typing all this is not easy. When the waiter passes by, my instinct tells me to close the notebook. I hope he does not get suspicious. It’s not that I am going to meet him any time soon (another good reason not to upset him).

Finished everything except the Speck, which I am going to savor for a couple of minutes. Mixing it with the horseradish kills the Speck taste. Wow, it’s the proper Styrian horseradish. Sad that otherwise the Brettljause is not different from what they would sell at the most touristic Heuriger of Vienna or Lower Austria.

At the end, finish all the cheese and meat and most of the horseradish. Leave quite a lot of mustard. Ask the waiter for the bill and get a complimentary Schnapps. Add one point to the final score straight away.

Leave the restaurant very full and reasonably happy. The elderly Austrians continue to sing, but the performance is still not going to win any awards.

Summary: No point in bothering to order something that is not even on the menu. Stick to the creative cheese plate, if you can, or simply order some Speck. A very nice restaurant nevertheless.