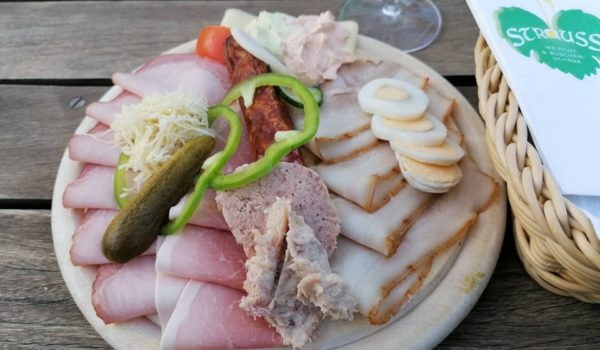 The last weekend of October is the last chance of experiencing the Southern Styria in its full power. There are still numerous stands along the roads selling Maroni (sweet chestnuts) and Sturm (freshly fermented grape juice), including the one made out of the Styria’s famous Schilcher wine. Slowly, the Sturm is getting replaced by a Junker, the first wine of the season – still not particularly alcoholic, but definitely more of a wine than the Sturm. For those in the know, the last weekend of October is the time to visit Südsteiermark.

The trouble is, there are plenty of people in the know, coming from all parts of Austria and even from the neighboring Slovenia (whose vineyard hills do not look much different). However, when the weekend coincides with the Austrian national holiday, which is on the 26th of October, the trouble multiplies: now you have not only tourists but also the locals storming the wineries all around the area, resulting in overbooked restaurants and especially noisy clientele.

All in all, I was quite lucky with the Strauss. A tourist bus standing next to the restaurant was about to depart, the small groups of seriously drunk visitors heading towards it in a very unsteady manner. Another party, involving locals and very bad musicians was taking place inside the winery, leaving all of the garden area to me alone, making it almost a surreal experience on such a special day. And it was great, until the sun disappeared and it started to get very cold very quickly.

Anyway, I was happy and quite proud of myself for being able to stomach another Brettljause after the morning’s disaster. A large bottle of mineral water helped a lot, I must admit, for at that moment I liked the water much more than I liked wine. Actually, Strauss’s wine was absolutely fine, as confirmed by a large number of small files who decided to end their lives by dipping into my wine glass and drowning. Too tiny to be taken out, they found their last resting place inside my stomach, and, honestly, I could not care less.

The Brettljause did not look like much but had a few highlights that made me eat it with a sense of content rather than responsibility (yes, since the inception of this site I do feel responsible somehow, stupid old me). The Verhackertes was one of those highlights, salty and containing some meat bits for a change. The Hauswurst was another one – perhaps having a supermarket origin, but very tasty nevertheless. And all the meats – the Schweinsbraten, the Geselchtes and the ham – were totally OK. I could have had them in a sandwich and not complain a second. Even the liver sausage was fantastic… no, that would be a horrific lie. It was not. It was better than a few other liver sausages, that’s all.