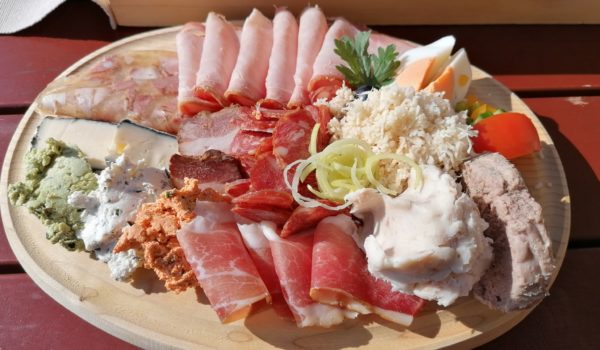 Despite a somewhat scary name (like in “I got distracted for a second and a vicious Repolusk chose that moment to attack me”), this winery in the middle of the Styrian wine street is extremely pleasant. On a sunny, unusually warm (thank you, global warming) October day the view over the vineyard hills towards Slovenia is fantastic, and one can spend hours simply sitting, reading a book and drinking wine up to the point that the letters on the page turn into a blurry mess.

I could not do that, of course, my plan being eating a Brettljause here for lunch and another one somewhere else for dinner. Besides, I was not yet feeling especially comfortable with the rented e-bike I was using for my hill-cruising, and had a slight worry that an excessive amount of alcohol would result in a less-than-optimal end of my short holidays, possibly involving broken limbs and severe bleeding of my right knee (that knee has recently been very good at getting into trouble). Looking back, alcohol is probably the best way to get confidence when it comes to electric bicycles, since after half a liter of wine at Repolusk my cycling skills have significantly improved.

The Brettljause, when it arrived, impressed me by the amount of different stuff on the board, but also troubled me slightly by the enormous slice of a gray substance that was quite certainly liver, a piece of headcheese that was mostly jelly and a ball of fat-only Verhackertes so big I knew straight away I would struggle with it. Mind you, I like Verhackertes in reasonable quantities, but the more of it there is, and the less meat it contains, the more I start thinking of what it was in its previous life. And that is usually not a pleasant thought.

The above-mentioned ingredients were as annoying as I had expected. By the time I finished them, most of the bread was gone, as well as most of the finely shredded horseradish. On the other hand, I was very much looking forward to the remaining bits: the slices of tasty-looking ham, soft cheese, two types of Speck, small round slices of salami and three types of spread: pumpkin, herb and the unavoidable Liptauer.

The salami aside, they were all OK, the cheese and the spreads providing the best taste. As for the salami, it was so dry that chewing upon a salted shoe sole would have provided a similar pleasure, or rather a lack of one.

I am not in the mood of complaining, however. The hour or so that I spent at Repolusk was more than enjoyable, and for a minute I even regretted I had gotten into all this bike-renting business. It would have taken me two hours to reach the winery by foot and another two hours to get back to the hotel; the remaining hours I could have simply spent enjoying the view, the sun, the book, and getting seriously pissed.