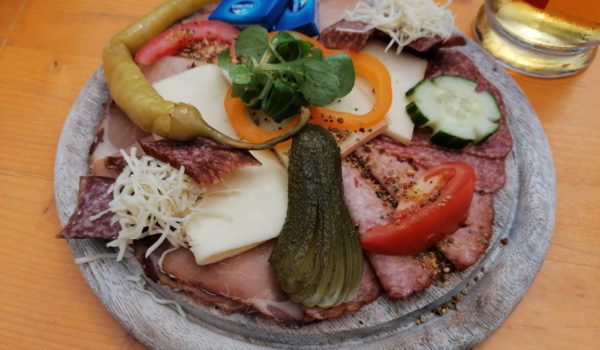 Worry not, it’s not the final final Jause. (Not that I worry that anyone is worried.) It’s just my last Brettljause this year in the beautiful Pinzgau valley in Salzburgerland. Tomorrow, after eight full days of hiking – and eight Brettljausen, naturally – it’s time for me to take the train and go back to the Brettljausen of Vienna and Lower Austria. At least for a while.

Today I decided to swap high-alpine valleys for a fucked up Wildkogel ski mountain on the other side of Pnzgau. As is the case with most other ski mountains in Austria, hardly anything grows there anymore. True, there are a few cows eating the remaining dry grass and a couple of lakes that are not lakes at all but artificial reservoirs to serve as the source of fake snow if the winter starts late. However, it’s nearly impossible to take a picture of such a place that would not be spoiled by a non-operating cable car somewhere in the background.

The good thing about Wildkogel is that the other side of it (the one not facing the valley) is still free of cable cars and features some vegetation and a number of farms and pastures. The Geisl Hochalm is located right on the opposite side of the Wildkogel from the cable car’s station and appears to be quite a “normal,” even authentic farm house with a large terrace and friendly staff who look like peasants.

On the other hand, I would be surprised if the stuff on my Brettljause came from the hut’s own production. As you can see from the restaurant’s home page (the link above), it belongs to the same owners as a hotel in the village of Bramberg, so the two establishments probably share the same suppliers. The suppliers could very well be local ones, of course.

At first, the Brettljause made me suspicious because of the amount of pepper spread over all the ingredients. Usually this is a sign of the cook’s attempt to add taste to something that did not originally have it. And indeed, the three slices of cheese did benefit from the pepper, the fact that does not say anything in the cheese’s favor. The Karreespeck was the main ingredient quantity-wide and was neither better nor worse than any other Speck I had eaten in Pinzgau. As for the third type of ingredient, the salamis, some miscalculation on the cook’s side had obviously taken place. There was hardly any point in serving a rectangular-shaped salami with a round-shaped one and adding a few slices of harder and thinner sausage to the mix if all three tasted exactly the same. Even the lightly salted salami featured as a few thin slices did not taste much different.

As you must have realized by now, the Brettljause of Geisl Hochalm was not really fantastic. It could have been worse, of course, and in a way, its slight “fakeness” fits well with the fakeness of the ski-destroyed mountain nearby.