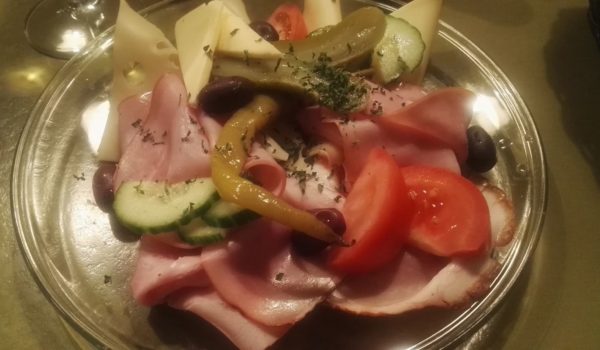 Oh dear. I may be describing the worst Brettljause of the year, and I may be partly responsible. OK, my only fault was to actually go to the 5er Pflug, but in retrospective, I could have trusted the online menu just a bit more and accepted that a “ham and cheese plate” could mean nothing else than a plate with ham and cheese on it.

Instead, I had dreams of different types of ham and different types of cheese. And maybe a bit of salami and a spoon of Liptauer added. A proper Brettljause, I mean, just hidden under an inconspicuous name. It’s known to have happened.

Unfortunately, in this case, the name of the dish was so exact that even trying the dish seemed unnecessary. Although it is quite possible that not all the ham was of the same sort (a few slices seemed to have a different crust) and that the holes in one slice of cheese indicated that is was a different type of cheese from the other one, the truth is, I felt no variety of taste whatsoever. What I did feel was that the cheese and the ham came from one of the many supermarkets in the remote worker-class district in which the Heuriger was located.

Not that the Heuriger was a particularly bad one. It looked clean, and the staff were friendly, but the sounds of Viennese songs played badly by a band of amateurs at a party next room proved that to fully enjoy a place like that, it was not enough to be an Austrian or even a Viennese. One had to be born and grow up in Meidling. Which is quite a sad fate, if you ask me.