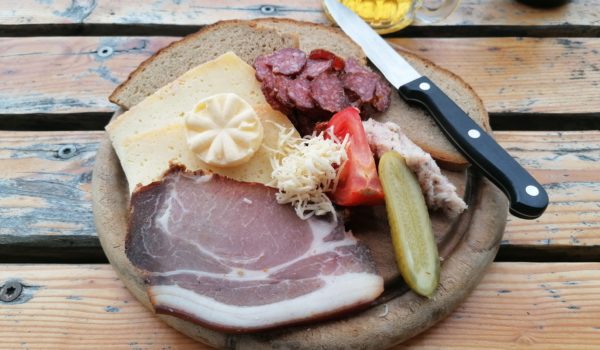 Halfway down the Fulseck mountain, not far from the Dorfgastein’s cable car middle station, the Heumoosalm is seriously rustic. While the front side of the hut, facing the Gastein valley is used by the snack restaurant, the other half of it serves as a cowshed. I don’t know if cows give a shit about the smell of ex-pigs and beer, but I do care about the smell of cow shit. It takes a few minutes to get used to, but fortunately it’s possible.

The Brettljause of the Heumoosalm is very basic and extremely authentic. Not only is it served with nothing but a sharp knife, but the basic items like salt, pepper and serviettes are missing as well (though I am sure I would have gotten them had I asked). All one finds on the Brettl are a thick slice of Speck, two thick slices of cheese, some Verhackertes and a long hard sausage cut into tiny round slices. All home-made, as the poster I saw in the nearby woods proclaimed, and it’s not hard to believe that.

The cheese was the best part, in my opinion, quite tasty and going well with the fresh alpine butter. The Verhackertes was the second best thing, quite fat but not too salty. The Speck disappointed somewhat by its lack of flavor. I’ve gotten quite used to strong-tasting Speck from my recent visits to Salzburg, though it is quite possible that the taste came from some of the chemical additives (those identified with the letter “E” followed by multiple digits), while the bacon of Heumoosalm came from a happy (to a certain point) organic alpine pig. The hard sausage, on the other hand, was very unexceptional, and I was quite happy when the owner’s dog strolled by and begged half of it.

If you are looking for a “proper” restaurant with a long menu, look elsewhere, but for a short rustic experience with a nice view, the Heumoosalm is perfect.