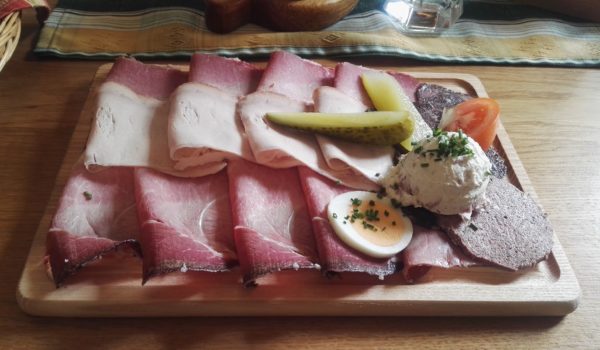 Even though being a marketing ploy to a large extent, the Mostbaron Heurige are too good to be ignored. Having visited all of them, every year I look forward to coming back, if not to try one of their many kinds of Brettljause, then to enjoy a few mugs of the Most that is actually drinkable and even gratifying (in a “getting unexpectedly pissed” sort of way).

Six years ago, Zeilinger had shocked me with an unfinishable “Farmer’s Jause,” featuring different varieties of dead pig. Today, upon receiving a Brettljause, which I knew would be smaller and thinly cut, I was surprised at first to see something so ordinary that I began to wonder what had happened in the years I was away. It looked too neatly arranged and, for some ingredients, scarce to the point of stinginess.

Fortunately, the ingredients concerned were the ones I generally like the least, namely the black pudding and the liver sausage. The latter especially had such a strong taste of liver that the single slice served was more than enough for me. The unidentifiable spread (a weird mixture of Liptauer with something cheesy and garlicky) was much better, however, and took up the larger part of the supplied bread. The remaining part consisted of very dry, yet fresh Schweinsbraten (it is a special taste that I somehow enjoy) and two types of meat that looked like one. If was only a careful study of the crust and a glance at the menu that convinced me that I was in fact dealing with a Geselchtes and a Surbraten. Looking the same – like thin cold slices of a medium-grilled steak in fact – they tasted slightly different, and, like the rest of the Brettljause, totally authentic. The pig that went into those ingredients has been an inhabitant of the Mostbaron’s farm at one point in time, no doubt about that.

Six years since my previous visit, Zeilinger remains just as hard to reach, although walking from the Blindenmarkt train station, rather than from the city of Amstetten, does save a couple of kilometers. The portions may be getting smaller, but the quality remains top. A spring in the Lower Austria without a visit to Mostviertel is still a wasted spring.