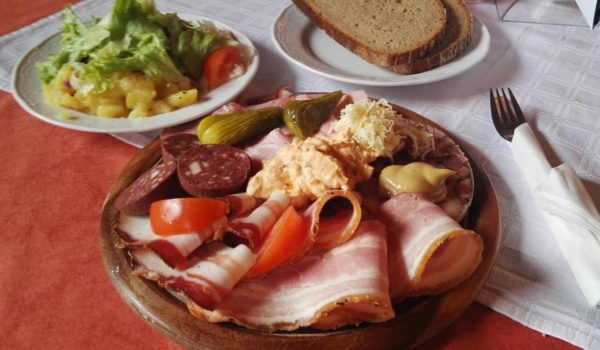 Let’s start by clarifying a confusion. I suspect that I am the only one here who was confused, but who knows. Maybe the confusing information hanging on this site for years has managed to confuse someone else.

Basically, six years ago I visited a restaurant near the famous cliff-climbing location of Peilstein called Schützhaus “Am Holzschlag.” It belonged to the Karner family, who also owned (and still own) a Mostheuriger a couple of kilometers away. Since then, the Schützhaus has occupied the top spot in my list of heaviest Brettljausen. The dish did not particularly impress me by its taste, but its size was truly extraordinary.

Some time later, I searched for “Am Holzschlag” again and having found something called Gasthof am Holzschlag at the same location, wrongly assumed it was the same restaurant under a different name. Of course, I was wrong, although the Gasthof was no more than 50 meters away from the now closed Schützhaus and – to my delight – also offered a Brettljause.

Unfortunately, my Top 5 page will have to be changed now, for the “new” Brettljause at Holzschlag was nowhere as big as the “old” one. It was also less tasty, especially while I was clearing up the stuff I don’t like. To the restaurant’s credit, the black pudding did not taste strong, and the headcheese had 95% meat and only 5% jelly, making it more of a normal sausage than a disgusting wobbly mass. The Liptauer was average and boring, but once I had reached the bits I was most looking forward to – the ham and the two types of Speck – things started to look much brighter. The crust of one of the Specks had the flavor of a Stelze (a pork knuckle), while the other was quite salty and pleasantly fat; the ham was simply high quality, as one can only find at the delicatessen section of good supermarkets.

Although it is a pity that the Schützhaus and its monstrous Brettljause are gone, Gasthof am Holzschlag offers an acceptable alternative, and in my opinion is currently the best place to eat around Peilstein.