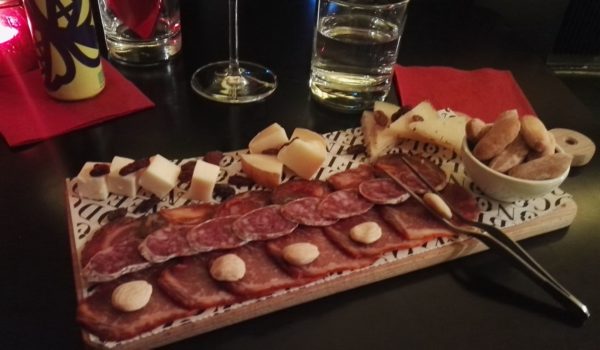 Colono is a small deli and wine bar close to Landstrasse, Vienna’s central railway station. I was recommended it as a source of authentic Spanish foods to buy for home, but went there because I found something looking very much like a Brettljause on the menu.

It was good that I went there on a Thursday and not too late, because at a busier time I would not have found a place to sit. It is really a tiny place, with four or five tables for two and a few chairs at the bar. It is not a restaurant for having a dinner and staying there for hours, though I doubt they will kick you out as long as you keep on ordering drinks.

The “tabla,” like the wine, was very Spanish, making me remember my recent trip to Barcelona. Three types of sausage and three types of cheese were included, and although I am not going to risk naming them (check out the photo instead), I can attest that they were not at all of a supermarket sort and extremely tasty. The usually expensive Jamón was not part of the dish (one can order it separately), but the quality of the included ingredients completely justified the price.

The lack of bread came as a surprise, because the supplied small crackers were a poor substitute. The nuts and raisins, on the other hand, were very welcome. The strangest thing, however, was that instead of a knife and a fork the restaurant served the Jause with a small pair of pincers. There was something slightly “medical” about that, and after a few attempts I switched to using my fingers, which was just as, if not more, practical.

Slightly uncozy setting aside, Colono is the best address in Vienna if you want to try a Spanish-style Brettljause. It is fine for a quick glass of Spanish wine, too.