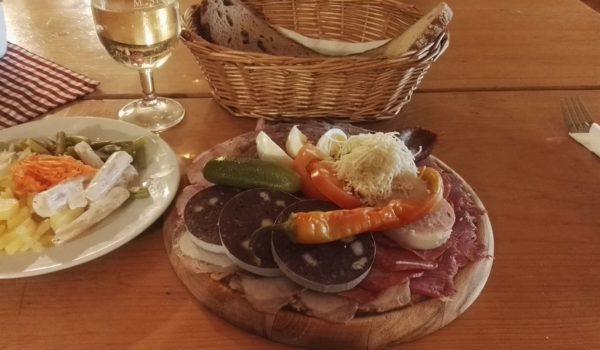 Most traditional Heurige offer a buffet, where visitors can choose their cold and, in some cases, hot dishes. A few “advanced” Heurige (sometimes called “Heurigen Restaurants”) carry a menu for the hot dishes but ask customers to order from a buffet if they just want some sausage or cheese. Much less common are the Heurige that allow all the dishes to be ordered from the menu. Mostheurige are, for some reason, better at that, but one can find a few wine taverns of that sort as well, especially in the Wachau valley area. These establishments are the main focus of this website, because, as I have already mentioned numerous times, I only review the Brettljausen that are offered “as is,” without an option of customization.

Simon’s Mostschenke is absolutely unique in the sense that all its dishes – cold and hot – are listed in a well-designed menu, prices included, but to order them one still has to walk to the buffet. There, in case you ask for a Brettljause, a buffet lady will grab it, cellophane-wrapped, from under the counter, ask whether you plan to eat it at the restaurant or take home, unwrap in front of your eyes and add horseradish if you want (of course you should). To be completely honest, this does not look appetizing, but one has to recognize that Simon’s decision to offer take-away food is not at all stupid business-wise.

Despite the cellophane, the Brettljause tasted much better than I had expected. This part of Austria, despite all my love for its nature and hiking paths, is quite down-to-earth when it comes to its Jausen. So down that it’s already earth if not lower. I like pork, but I do not need to be reminded about the animal it originates from each time I eat a sausage. Unfortunately, the sausages of Industrieviertel are like that: lacking in spices, but very heavy, basic, and, well, piggy.

Compared to the others, the Jause of Simon was almost refined. The ghastly (but not completely disastrous) paper-wrapper Blunzen aside, the varied ingredients did not only look good, but had a rather pleasant taste. The salami was almost spicy, and the Surbraten satisfyingly chewy and salty. Both the Luftgetrocknetes and the Geselchtes were dry but not at all piggy, and there was nothing to complain about the Schweinsbraten, the Hauswurst and even the Presswurst (head cheese). The absence of cheese was somewhat compensated by quality horseradish, but I was glad I took a small salad, too, because the dish alone would have been too dry otherwise.

I also have to mention the cat. As I arrived, the smallish white cat was sharing a bench with a group of people at a nearby table, sitting between two of them as if it was part of the company. No one was feeding it, as far I could see, but from time to time, the cat would earn a stroke and move around, begging for (and eventually getting) the attention. At one point, I managed to lure it, thinking of it as a way to get rid of some of the excessive Blunzen. It came… and stank so badly that I only took a quick photo of it and was happy when the owner took it away. If you think that cats are clean animals that never stink, go to Simon’s; the visit will destroy your misconceptions once and forever.